It was a sad day in Metal Music history on this past December 28th (2015). It’ll always be known as the day the thrash metal god Lemmy Kilmister, the lead singer and bassist for the band Motörhead, passed away at the young age of 70 years old. Lemmy had been sick for a while, but was given grave news about his brain and neck cancer on December 26th. The news was not good and the metal icon Lemmy slipped through our fingers 2 days later. His persona, his image and he himself will always be remembered as one of the Gods of Thrash Metal or Speed Metal as some may call it. Lemmy had added his own slight punk twist to their sound and that’s what made Motorhead so unique.

The video footage below was filmed on New Years Eve 2015 at the House of Blues in Las Vegas. Slash took to the stage and ripped out Ace of Spades in honor of Lemmy. Ace of Spades is a song by Motorhead that is wildly popular. Take a listen to how Slash and his boys take a stab at this great song, video is below. 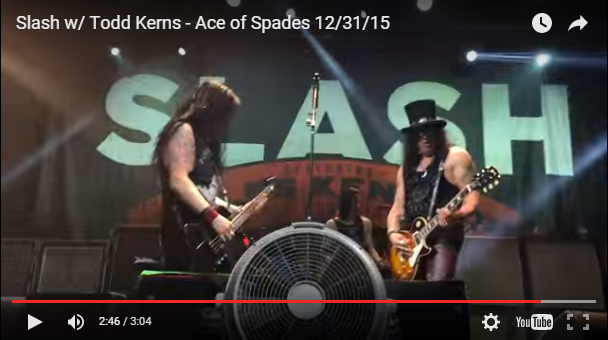 SLASH Performs on stage with Todd Kerns at the House of Blues in Las Vegas on NYE. They played Ace of Spades in honor of Lemmy from Motorhead.