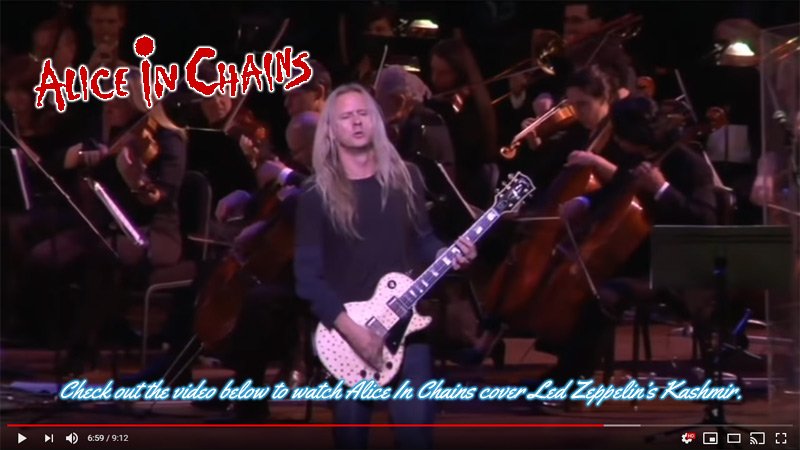 When it comes to music, there are just some songs that no band should ever try and cover. You’d assume that Kashmir by Led Zeppelin should be one of those songs. It’s been done, the song is complete and perfect just as it is. Yet, someone did attempt to cover it, and they succeeded. They did more than just succeed, they triumphed. Grunge rock monsters Alice in Chains, teamed with the Northwest Symphony for an incredible version of ‘Kashmir’. This musical feat took place in their hometown of Seattle, Washington, and was done to benefit Seattle Children’s Hospital and Regional Medical Center.

What ended up happening was an incredible rendition of a song that was already beyond great. You can feel the sound reverberation in your chest as soon as the conductor begins the string and percussion parts. Then you hear the entire audience gasp and kind of shortly go bonkers. That’s when you know the stuff is about to hit the fan. With new front man, William DuVall, Alice in Chains delivers the most epic Led Zeppelin cover ever. His vocals might not be in the range of Robert Plant, but he can hit some pretty high notes. His voice reverberates against trumpets, guitars, major percussion, and the entire orchestra. It’s not an easy task for any musician. Bassist Mike Inez and drummer Sean Kinney have to be careful to not speed up the tempo. Their positions in “Kashmir” are crucial but prolific because of their poignant and well-timed instrumentation. Jerry Cantrell is always a star and brings together Alice In Chains in an iconic way.

The Northwest Symphony definitely added a hard-hitting combo-punch to the Led Zeppelin cover. With their conductor banging his head to the music, you can easily tell that they’re all having a great time. The only thing better than watching the video below of the song, was being there. The sound with the orchestra must have been just about over-whelming. Check out the video below.

Alice in Chains, along with full orchestra, do an amazing job in covering Led Zeppelin’s song Kashmir. Check out the video below and crank your volume!