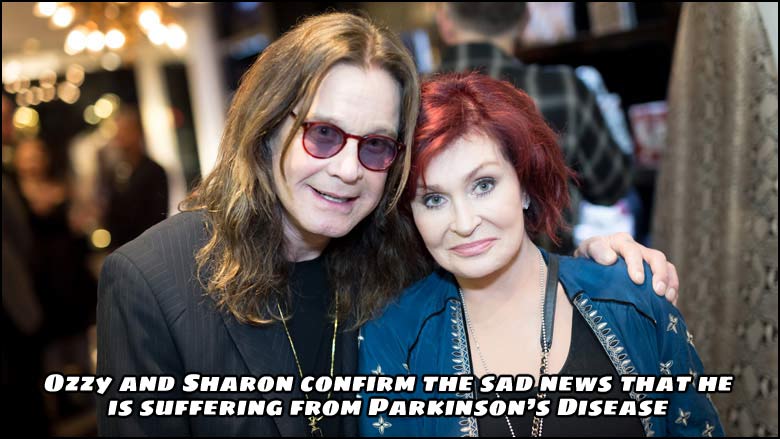 Ozzy Osbourne is one of the largest icons in all of heavy metal music. He’s set the stage for almost every heavy metal band that has come after him. Between his time with Black Sabbath, and his own solo career, some call him the Godfather of Heavy Metal. It’s not new news that Ozzy, at this point of his life, does have some issues. Fans and people that have watched him throughout his entire career always knew there was some sort of nervous system condition which cause his arms/hands to rattle and shake. It wasn’t a large blatant move, but you could easily see it if you watch him doing just about anything. In a recent interview with Good Morning America, as Ozzy sat next to his wife and manager Sharon Osbourne, he confirmed that he has been diagnosed with Parkinson’s Disease. The disease affects people differently. Just look at poor Muhammad Ali (the greatest heavy weight boxer of all time) towards the end of his life, the disease ravished his body and nervous system; It was a very upsetting thing to see. Ozzy went on to say “”I got a numbness down this arm for the surgery, my legs keep going cold. I don’t know if that’s the Parkinson’s or what, you know, but that’s the problem.”. Sharon went on to confirm that Ozzy is suffering from Stage 2 of Parkinson’s Disease, which affects both sides of the body, and causes stiffness and tremors. Sharon went on “There’s so many different types of Parkinson’s. It’s not a death sentence by any stretch of the imagination, but it does affect certain nerves in your body. And it’s like you have a good day, a good day, and then a really bad day.”. Ozzy finished up the subject when he said “It’s been terribly challenging for us all. I did my last show New Year’s Eve at The Forum. Then I had a bad fall. I had to have surgery on my neck, which screwed all my nerves.” Ozzy continued “Coming from a working class background, I hate to let people down. I hate to not do my job. And so when I see my wife going to work, my kids going to work, everybody’s trying to be helpful to me, that gets me down because I can’t contribute to my family. But you know, put it this way: I’m a lot better now than I was last February. I was in a shocking state.”. As of now, Ozzy is still not changing his lifestyle and will continue on to tour and perform concerts for as long as he can. He has a new album coming out in late February, and he’ll be on tour later in the year.

Ozzy and wife Sharon confirm the news that Ozzy is suffering from Parkinson’s Disease.

Written and Posted by Alan Collard