Relax METALLICA fans, Lady Gaga is NOT becoming a co-singer for the Metal Band 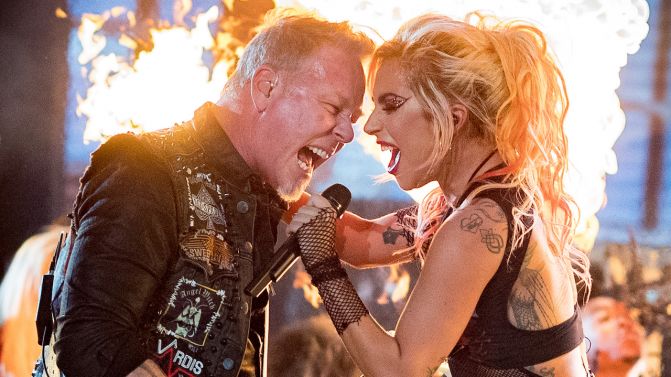 After their Super Bowl performance, rumors began to swirl that due to the event being such a success and the fact that they got along very well, that Lady Gaga would possibly join the Metal Rock Band METALLICA as some sort of co-singer on future projects. Well you can forget that idea, even though Lars Ulrich (Metallica’s drummer) briefly hinted at it. Following those comments, a story published on the website of WJLA, the ABC affiliate in Washington D.C., claimed that Lars Ulrich had actually invited Lady Gaga to join them on stage “whenever her schedule allows”. The story included no foundation for that claim and cited no source for it, but instead simply quoted the Access Hollywood comments by Lars and left out that he was joking.

Last week additional reports surfaced online that appeared to be based on the WJLA report, which claimed that the pop star was actually offered a job with the thrash legends. Watch the interview clip and judge for yourself : (See Video Below)


[VIDEO] Grammys 2017: Lars Ulrich Previews Metallica’s Performance With Lady Gaga
Metallica’s Lars Ulrich speaks with Access Hollywood at the Clive Davis and Recording Academy pre-Grammy Gala in Beverly Hills, and shares that the band’s performance with Lady Gaga will make her “the coolest metal chick in the universe!” Plus, what did Lars think of Gaga’s Super Bowl performance?

The Super Bowl performance by Lady Gaga and Metallica was pretty good, but don’t expect too much more collaboration between the two.