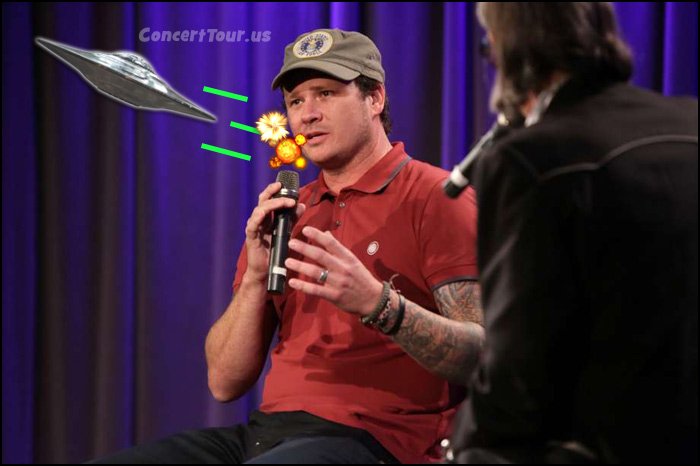 By now, you should all be familiar with the whole Blink-182 and Tom DeLonge story. It’s pretty simple really, the band was (and has been) a huge success. In the middle of things, 1/3 of the band, Tom DeLonge, figured he’d leave the band and seek to do his life’s dream; Investigate UFOs. No, you are not reading The Onion (satiric online news source), this is all true as strange as it may sound. Now it seems as if Tom has taken things a bit further. In a recent announcement he said that he will be releasing a multiple-volume non-fiction book series about UFOs titled, “Gods, Man, and War.”

The book series is a “companion investigation series” to a fictional thriller DeLonge worked on called “Sekret Machines: Chasing Shadows” and is positioned as a collection of interviews with high level government intelligence workers, military officials, and scientists that seeks to explore the possibility of extraterrestrials.

“‘Sekret Machines’ is the opening salvo on the complacency of human institutions where the UFO Phenomenon is concerned,” said Peter Levenda, who co-wrote the book along with DeLonge. “It’s designed to shake people up, to make them question their assumptions. This book will not only show a different take on the Phenomenon, by treating it as a given, but a new approach to religion that takes a very long look at religious texts and ideas from around the world to discern the traces of an event that changed us forever.”

The first in the series, titled “GODS,” will be released on March 7, a week after the novel “Chasing Shadows” goes on sale.
“There is another Force in the universe of our Reality, another context for comprehending what has been going on for millennia and especially in the last seventy years,” the description for “GODS” reads. “Sekret Machines is the result of input from scientists, engineers, intelligence officers, and military officials — a group we call the Advisors — and transcends the speculation of journalists, historians and others whose conclusions are often either misinformed or only tease around the edges of the Sekret Machines.”

DeLonge is also working on a sci-fi movie called “Strange Things,” which focuses on Southern California skateboarders who investigate UFOs.
DeLonge and his former bandmates, Mark Hoppus and Travis Barker, have a rocky relationship. Both parties disagree on the circumstances that led to DeLonge’s split from the band, with DeLonge saying he left the band to pursue studying extraterrestrial life, and the remaining band members maintaining that it was a bit more complicated than that.

Tom DeLonge speaks about his thoughts back in 2015 at The Grammy Museum.