Nick Jonas has Spinach Mishap During the Grammys 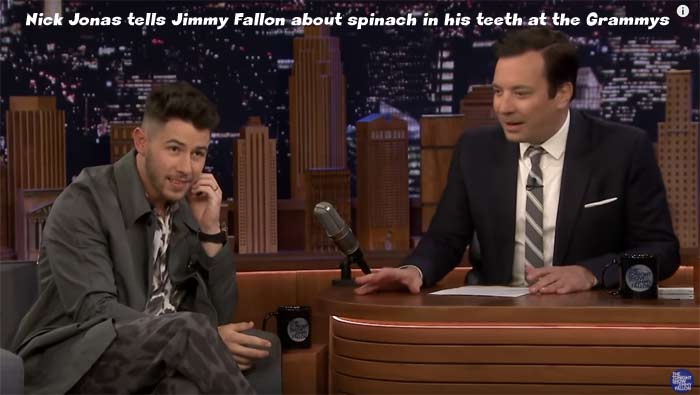 This is actually quite a funny story. The other night I was watching Jimmy Fallon (I love his show, he’s so goofy and funny) and he had on singer / songwriter Nick Jonas. The two chatted a bit about a few subjects, but then Nick Jonas told the story of how after he got off the stage at this year’s Grammy Awards Show, the first text he got was from Adam Levine (frontman of the band Maroon 5) saying that Nick’s performance was great, and that he could see something stuck in his teeth. Nick said to Jimmy Fallon “I went to my phone, and the first message on my phone was from Adam Levine. He’s like, ‘Nice performance, you had a little schmutz in your teeth.’”. This made him wonder why it took someone watching the show to tell him, and why his brothers, who he just performed with, didn’t tell him beforehand. “Here’s the thing that’s really frustrating about this,” Nick continued. “First of all, there was spinach in my teeth from my breakfast. In the entire day, no one thought to be like, ‘Hey man, there’s something back there?’”. Check out the video below to see part of the Nick Jonas interview from The Tonight Show with Jimmy Fallon.

Watch the video below to see Nick Jonas tell Jimmy Fallon about having spinach stuck in his teeth during a performance at the Grammys.

Written and Posted by Annie Nagle