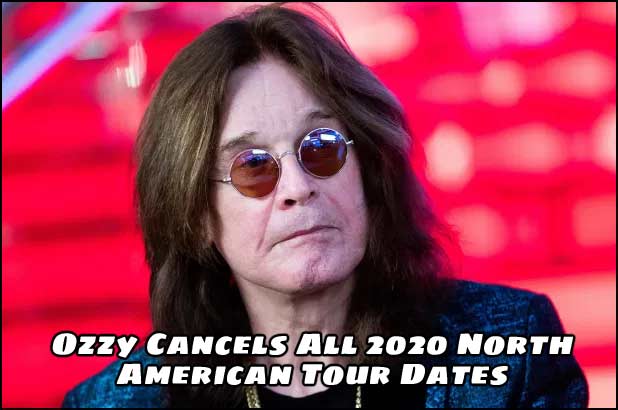 It’s been a rough year, to say the least, for rocker Ozzy Osbourne. So rough that he just made a public announcement cancelling all his 2020 ‘No More Tours 2‘ North American dates. February 21st, 4 days from now, is a big day for Ozzy because it’s when his latest studio album ‘Ordinary Man‘ becomes available to the public. Our feeling is that even though fans will initially be upset, in the long run they’ll be relieved to know now for sure that the shows in North American are NOT going to happen. We’ll have to give time for Ozzy to recoup, and get himself back on the road. Supposedly he his headed over to Europe for medical treatments and when asked about it, Ozzy responded “I’m so thankful that everyone has been patient because I’ve had a shit year. Unfortunately, I won’t be able to get to Switzerland for treatment until April and the treatment takes six-eight weeks. I don’t want to start a tour and then cancel shows at the last minute, as it’s just not fair to the fans. I’d rather they get a refund now and when I do the North American tour down the road, everyone who bought a ticket for these shows will be the first ones in line to purchase tickets at that time.”. If you are one of the sad fans that is now stuck holding tickets, don’t worry because refunds are available at point of purchase.

Written and Posted by Neil Rosario