Bruno Mars Tells Fans To Get Ready, Plenty of New Music is On The Way 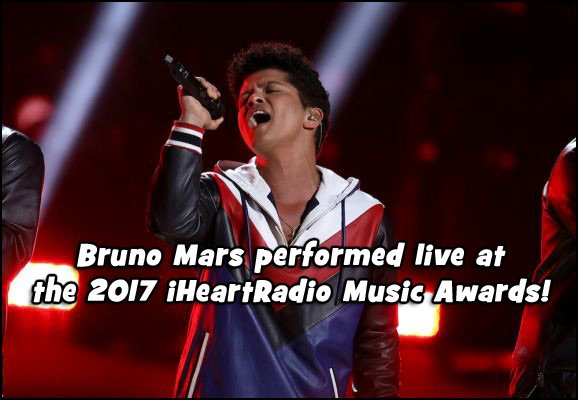 Bruno Mars says that he is “just getting started” when it comes to making new, amazing music. Just recently at the iHeartRadio Music Awards, Bruno Mars was honored with the Innovator Award, where he also performed as the show’s flashy final act. Out came Bruno Mars, all decked out in a black suit blazer, black track pants and sneakers. The 31-year-old crooner performed a mix of his popular hits, starting off with “Treasure” from his 2012 album Unorthodox Jukebox and “That’s What I Like,” off his most recent album 24K Magic. Every new song and high note that he hit made the audience go nuts, and as the camera panned around the hypnotized crowd, it was clearly apparent why Bruno Mars was picked to close the show, and why he deserved the night’s special honor.

After his amazing performance, Bruno Mars accepted the Innovator Award and the first people he made sure to thank were his crew of backup singers and dancers, who have been with him for many years. “We’ve come a long way,” he said, after asking them to join him at the front of the stage. “We used to play bars, 200-seat rooms, and now you’ve seen these guys in the videos, you’ve seen ’em at the Super Bowl. This is my family right here.”

Bruno Mars was honored with the Innovator Award at the 2017 iHeartRadio Music Awards Show. He also promised new music!