Don’t Laugh, It Seems As If Chimpanzees Seriously Do NOT Like Any Music from Justin Bieber 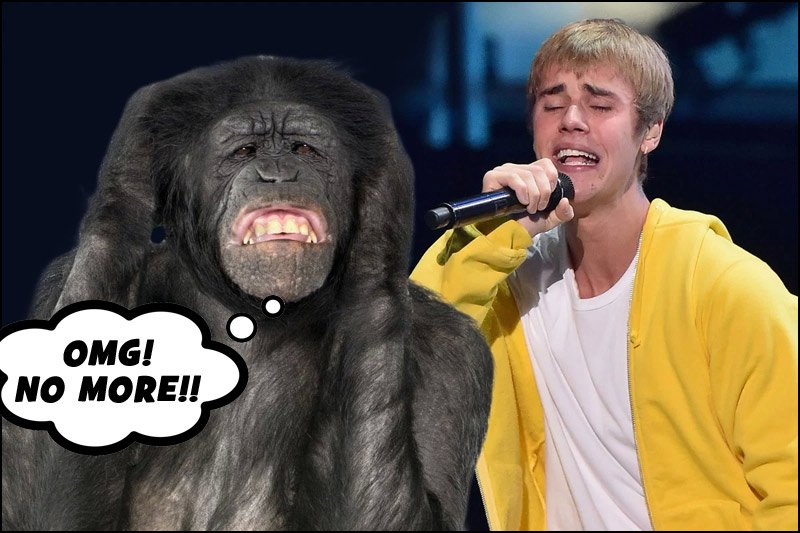 There actually has been recent research done involving all different genres of music and how it affects the moods of chimpanzees. According to some of these results, the chimps themselves are very turned off by Justin Beiber. We are not sure if the chimps should apologize for that or not, but it seems as if Justin Bieber is not the only one on the ‘do not play’ list. Let it be known that chimpanzees are not Beliebers. New research has found that great apes have zero appreciation for music – a break from past studies that suggested chimps find slow music to be relaxing. Researchers at the University of York found that music has no effect whatsoever on their behavior, which would make humans the only species to have evolved an appreciation of it.

The research team played a selection of music, which included Adele, Beethoven and, yes, Bieber, for chimpanzees at the Edinburgh Zoo and the National Center for Chimpanzee Care in Texas. They noticed the chimps were more likely to leave their enclosure if Justin Bieber’ ‘Beauty and a Beat’ or Adele’s ‘Rolling in the Deep’ was played. The chimps didn’t move when slower classical music, like Mozart, came on. (Other songs tested included Bruno Mars’ ‘Locked Out of Heaven’ and Katy Perry’s ‘ET,’ featuring Kanye West, among others.)

But the primates probably aren’t trying to demonstrate a musical superiority, or distaste for the mainstream music machine. They’re most likely responding to a common ritual. Older male apes often drum on trees as a show of aggression – and the Edinburgh Zoo is outfitted with metal tunnels for this purpose. So when the fast drum beats of Adele’s ‘Rolling in the Deep’ came on, it probably signaled to the chimps that the male apes were showboating again and they should go find something else to do. Researchers noted that it doesn’t mean they prefer classical music, they just perceive it as a different kind of noise.

According to the study’s lead author, Dr. Emma Wallace, their findings aligned with another recent study that found orangutans in zoos were ‘unable to distinguish music from digitally scrambled noise.’

Even chimpanzees, when tested in research, could not stand the music of Justin Bieber!