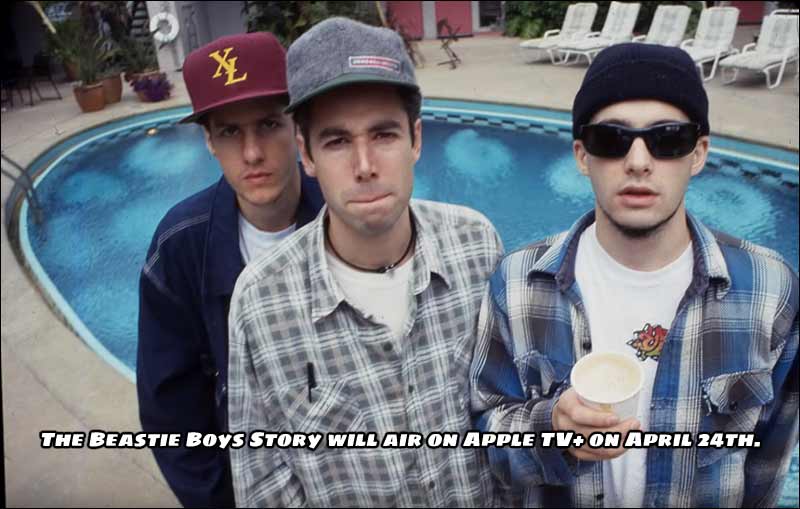 Coming to an IMAX theater near you on April 3rd, and then airing on Apple TV+ on April 24th is the film / documentary / biography of the rap group The Beastie Boys. Officially titled as ‘Beastie Boys Story‘, the trailer was released last night, and it features footage that has never been seen before with members Michael “Mike D” Diamond, Adam “MCA” Yauch and Adam “Ad-Rock” Horovitz. There’s also a ton of small clips of very funny situations the surviving members talk about. They even admit how they were all really just ‘wanna-be’ rappers with no real talent. ‘We were mediocre at best.’ was one of the statements. They continued “We went from being famous in a 14-block radius to being on tour with Madonna and Rick Rubin.”. The video trailer is not all a bed of roses though, it shows how the band cracked and ‘burned out’ as they became more famous by the day, and had trouble keeping up with the fame and the demand of fans. We also get to see the guys a family members, at home hanging with family and friends. The full movie will be narrated by both surviving members, Mike D and Ad-Rock, and will be directed by Spike Jonze. Check out the video trailer below.

Beastie Boys Origin Story To Hit Screens Near You. Coming to IMAX Screens on April 3rd. Watch trailer below.

Written and Posted by Adam Lester