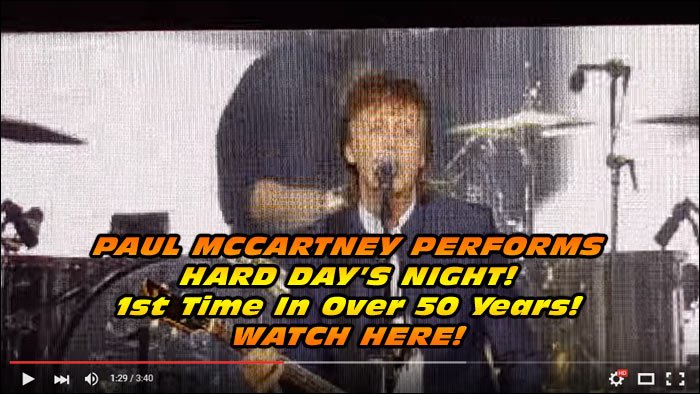 Paul McCartney had said to his fans that this year’s concert tour, which is named the One On One Tour, would contain all sorts of good surprises. He did keep his promise and on the opening night, April 13th, at the venue Save Mart Center, he performed a Beatles song which he hasn’t played live in over 50 years. That night in Fresno, California was a very special one as Paul McCartney began playing Hard Day’s Night. His fans of course, went wild. (See the video below!) He continued the night, playing almost 40 songs which included Love Me Do, In Spite of All the Danger, The Fool on the Hill, You Won’t See Me and FourFiveSeconds.

The last time Hard Day’s Night was performed (by The Beatles) and sang by Paul, was way back in 1965. Also, when he started playing Love Me Do, the audience again went wild. It’s been since 1963 since he’s performed that song live. Although Beatles drummer Ringo Starr has played it many times during some of his recent concert tours.

Other classic songs were performed also, Paul McCartney’s opening concert was loaded with popular tunes such as Band on the Run, Blackbird, Back in the U.S.S.R., Live and Let Die, Hey Jude and Yesterday. He also played a few songs (New, Queenie Eye and Save Us) from his 2013 solo album New. The live concert ended with Golden Slumbers/Carry That Weight/The End from the Abbey Road record.

Paul McCartney’s One On One tour, which is taking him all over the globe, continues to move on. It’s taking him across North America and to many international venues, and new tour dates still continue to be added. Check out our Paul McCartney Tour Page for all his latest tour info.


Picture Taken From One Of The Video Screens at the Concert.

It’s been over 50 years since Paul McCartney has performed Hard Day’s Night. Watch the video above!