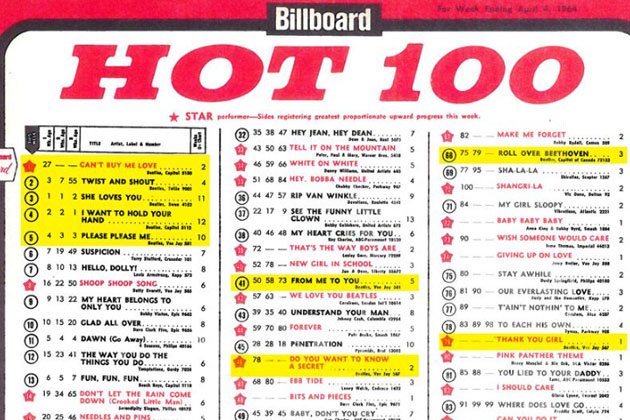 I guess you could safely say that it is possible that maybe one day some other musical band may appear and have every ounce of an impact on the entire world as The Beatles did. There is one achievement, however, that the ‘Fab Four’ set that, in all seriousness, will never be topped. As I write this, the only one I can think of would be Michael Jackson and his release of Thriller, but it still did not come close to The Beatles in April of 1964.


The chart that week also included two novelty records about the Beatles: “We Love You Beatles” by the Carefrees (No. 42) and “A Letter to the Beatles” by the Four Preps (No. 85). The next week’s chart saw the debut of two other Beatles tunes, “There’s a Place” (No. 74) and “Love Me Do” (No. 81), giving them 14 of the Top 100 songs in America. There were several reasons why the market was so flooded like this. The Beatles came to America just a little more than a year after they came out in England. Capitol responded by issuing as much of their back catalog, including the band’s singles from A Hard Day’s Night, as possible. In addition, there was an ongoing legal dispute with Vee-Jay Records as to who owned the rights to the songs on ‘Please Please Me’. Knowing that they had a limited amount of time to make as much money as possible, Vee-Jay put out as many singles as they could afford. Two of the Top Five songs, and five of the Top 100 songs, were released either on Vee-Jay or their subsidiary, Tollie.

Check out the charts for yourself! The Beatles songs are all highlighted.