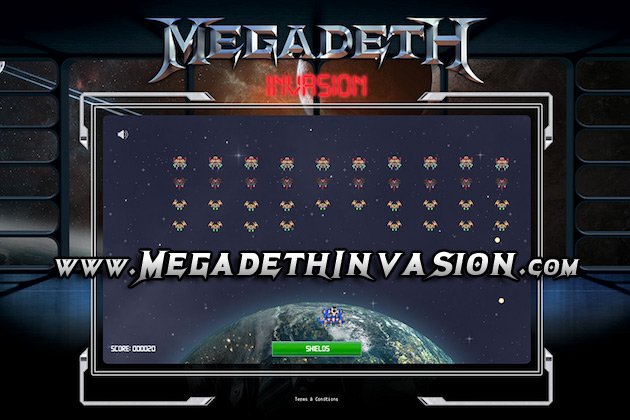 Megadeth‘s latest studio album release Dystopia has swiftly become a a big fan favorite among the extensive discography of the metal behemoth. The entire album release has given Megadeth fans some of the most appealing metal-related content with a series of very cool virtual reality videos for five of the album’s releases and even a Megadeth Bootcamp where fans spent the weekend at Dave Mustaine‘s California estate (Took place in march). If you thought that was it from the mega-metal band, you are wrong! The band has just launched the ‘Megadeth Invasion‘ computer video game which can be exclusively played on the band’s website.

As seen in the image below, the game takes on the theme of the classic arcade game Space Invaders. Those who are enlisted in the Cyber Army (Megadeth’s official fan club) can play the game at the dedicated website with a chance to win a Dystopia prize pack including a Kiko Loureiro Signature KIKOSP2 Ibanez Guitar. Additional prizes being offered are a Dystopia Deluxe VR bundle; a Dystopia poster signed by Dave Mustaine and a vinyl Dystopia record.

You can see Megadeth live in concert this year as they will be treking along with the legendary Scorpions on a North American tour. For a full list of performance stops, where to get tickets and more, check out our main Megadeth Tour Page.