He plays guitar, he sings; He’s Zakk Wylde. A man and a living legend. 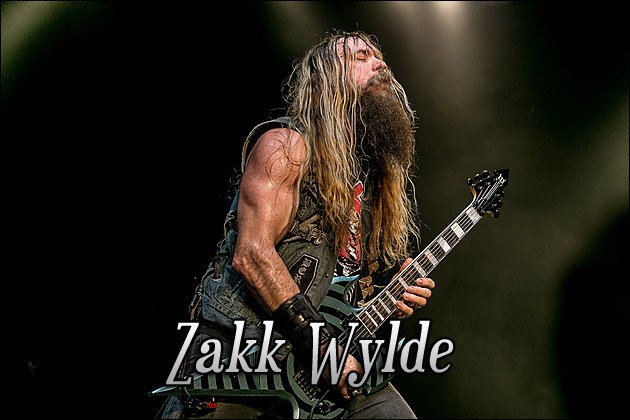 Heavy Metal, meet Zakk Wylde .. Zakk Wylde, meet Heavy Metal, AND CRUSH IT. And so he began to CRUSH IT and has not stopped. First time I had heard Zakk Wylde on guitar was of course on an Ozzy album. Knowing that it could not be Randy Rhoads and that it wasn’t Jake Lee, but it was someone that played like them, I had to find out who he was. Zakk Wylde was his name and he played with Ozzy on a total of 8 record albums. No Rest For The Wicked, Just Say Ozzy, No More Tears, Live & Loud, Ozzmosis, Down To Earth, Live at Budokan, and Black Rain. Obviously he played as lead guitar, but also contributed his talents on keyboard, piano and vocals. He’t not just ‘one of Ozzy’s guitarists’, no, no; He’s the mind-storm behind Black Label Society, aka BLS, Zakk Sabbath, Pride & Glory and some strict solo work. Zakk Wylde has also paired up with huge entertainers including Bill Ward, Dweezil Zappa, Damageplan, The Rippingtons, William Shatner, Leslie West, Black Veil Brides and plenty of others. Just recently Zakk Wylde with Black Label Society released their latest studio album ‘Grimmest Hits’ and it does not let down. Two of my favorite songs off of it can be found in their music video form below; All That Once Shined and A Love Unreal. There is no doubt that Zakk Wylde is the real deal.

There is no doubt that Zakk Wylde is one of the greatest metal guitarist around today.


Some of my Favorite Black Label Society songs are in video below :


Bleed For Me … the guitar & music is just raw and rippin’. Zakk Wylde displays the ability to sound as heavy as he needs to.


All That Once Shined