Led Zeppelin turns 50 this year, will there be a Celebration? 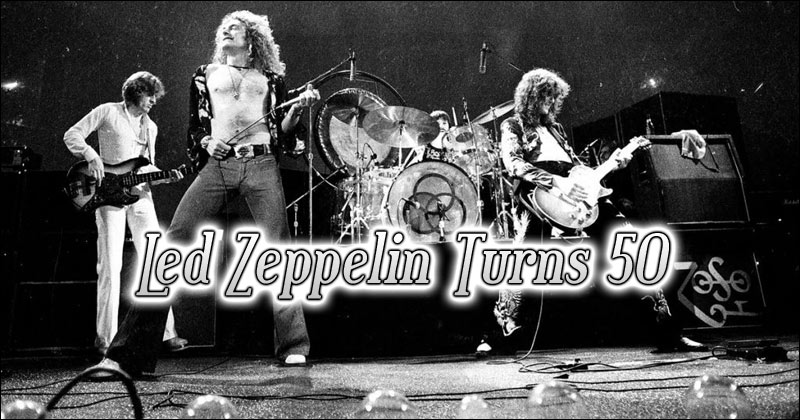 To simply answer the above question, we think the answer is ‘No’. According to Robert Plant, the band’s frontman & lead singer, there will be no Led Zeppelin reunion this year, or ever. While most fans would do just about anything to see their favorite rock n roll / blues band perform together (minus John Bonham; the band’s original and only drummer who died unexpectedly back in September of 1980), the words that have been coming from Robert Plant makes it all wishful thinking. While we definitely believe that Jimmy Page, John Paul Jones, and Jason Bonham (the son of John Bonham) would do the reunion in a heartbeat, it’s always been Robert Plant that denies it will happen. It appears as if he wants to put that part of his life behind him. The band Led Zeppelin originally formed back in 1968 in London England. The band was a simple set up of 4 talented musicians; Robert Plant on lead vocals, Jimmy Page on guitar, John Paul Jones on Bass and keyboards, and John Bonham on drums. Even though the band was made up of just 4 simple men, the music they put out was a very different and special kind of beast. From their very first album, there was no doubt that this was a very special collaboration. While much of the music was blues based, they added their own rock and roll twist to it, yet still the words of most of the songs followed the suit of the blues. Singing about things that depresses a man such as a a rough, untrusting relationship with women. Each song described a negative experience with a woman. Even the titles hit home; Good Times Bad Times, Babe I’m Gonna Leave You, You Shook Me, Dazed and Confused, Your Time is Gonna Come, Black Mountain Side, Communication Breakdown, I Can’t Quit You Baby and How Many More Times. Pick any song at random and listen to the words of Robert Plant. Within moments you’ll hear the sad, desperate cry of a man who has been used & abused by his woman. While future albums still stuck to the blues / Rock N Roll theme, the band did bring up other subjects.

Over the span of the band’s lifetime, and beyond up until now, they have sold over 300 million albums and counting. Those numbers are no slouch. The band is probably one of the most famous rock bands ever, and their style and music has influenced countless other musicians and bands. Ask just about any musician and they will tell you that Led Zeppelin has influenced them in one way or another. Rightfully so too because I have not come across any other band that has so many incredible songs. Each member of the band was a master in his own right. Robert Plant had an amazing voice and oozed sexuality and rock and roll. Jimmy Page was unlike anything most people have even seen or heard. While some may say his style was sloppy, to most he was (and still is) one of the greatest guitarists to ever pick up the instrument. John Paul Jones, while being somewhat shy, was still one of the greatest bass players the music scene has ever had. John Bonham, sitting behind a very simple drum set, could produce booming rhythmic sounds that most thought were timed using a computer. The combination of all this talent made Led Zeppelin one of the most famous bands in the world, and of all time. You can see why we’d like somesort of 50th anniversary get-together, it appears as if it will NOT happen. While we can all hope and pray that it does, only time will tell if Robert Plant will ‘give in’ and put something together. For now, we posted a bunch of Led Zeppelin videos below for you to enjoy.

This year is the 50th anniversary of the forming of the band Led Zeppelin. Will the band celebrate by going on tour?