We went to a P!NK concert and she flew right over our heads! 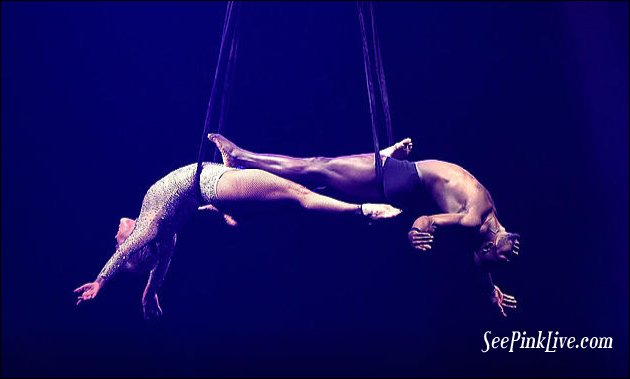 I had the great opportunity of going to one of P!NK’s concerts over the weekend, and it turns out that she flew right over us and I caught it on video! The concert was a birthday gift to my Shannon, who is a very big fan of P!NK. I know that it looks funny when I type “P!NK”, but that’s how she spells her name with the exclamation point and all. I think it’s cool.

I had heard that P!nk’s show was going to be quite theatrical with Cirque-de-Soliel-type acrobatics and flying whatnots, and I wasn’t disappointed. From the opening “Get The Party Started” where she came out to the stage hanging onto a chandelier-looking monstrosity to “Revenge” which featured a fight sequence (she was kickin’ a$$!!), there was a lot of her being hooked up to cables flying around like them monkeys from the Wizard of Oz.

Shannon was on her feet for most of the show (yes, she’s one of those), as it is quite an explosive experience. There were a few times where the music slowed enough to give us sitters a better view (the guy in front of me was on his feet for most of the show, and he was so tall that he towered over most of the people in our section) but when I could see past him, I must say that it was quite a great view!

The pinnacle of the evening for Shannon (just judging from her reaction) was the moment that P!nk flew right over us. Is was during the encore: the song was “So What”, and when those cables pulled her up towards the rafters, I thought that both P!nk and Shannon were going to go through the roof!

P!nk flew around the whole room for the entire song (I was able to secure Shannon to the floor, otherwise I think that her excitement would have had her floating up to meet P!nk!), and, at one moment, SHE FLEW RIGHT OVER US!

This is the only video I captured during the show, and it appears that I started the video at the perfect moment – watch: