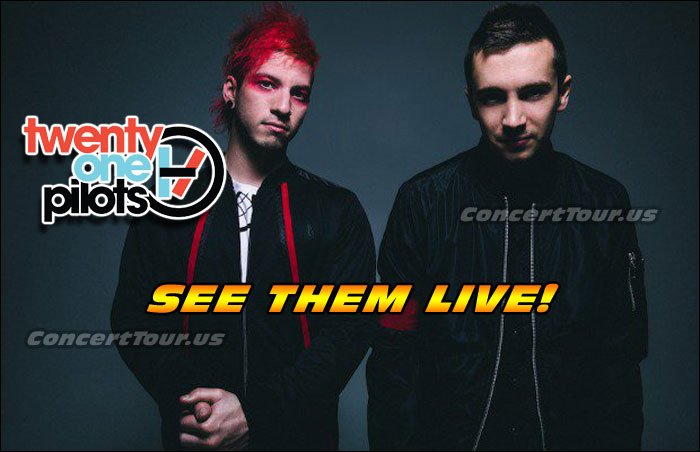 Below is a list of reasons why you, as a fan of all music, should make the time and go see the band Twenty One Pilots live in concert. First off, if you’ve never heard of them, go check out some of their music. If you scroll down, you’ll find some of their music videos. Then realize that behind all that music, is just two guys; Tyler Joseph and Josh Dun. The heart and soul of Twenty One Pilots. They’ve got a huge fan base, all their music is quite good and creative, plus their live performances are ALWAYS some thing special to behold. The following are just some of the reasons to get hooked on Twenty One Pilots :

– Huge, Full Venue Sized Sing-Alongs
When it comes to most of the music and songs that Twenty One Pilots will play in concert, many of the songs are so well known by the fans that each song basically turns into a huge, group sing-along. When known songs are performed, you can sit there and listen to thousands of crowd members singing along with the band. In fact at many a show of theirs, you hear the audience more than you hear the band. Just kidding, but it does get that intense. Fans of Twenty One Pilots are not afraid to show their love for their favorite band.

– Creatively Customized Live Appearance
There are many of the Twenty One Pilots shows where the two members, Tyler Joseph and Josh Dun, come out in some sort of mask. Each mask seems to be different and there are several theories behind the wearing of the masks, but it could all just be for show and the guys pick out whatever strikes them for that day. They are definitely not shy when it comes to throwing on a mask, or painting their hair a certain color, or totally shading their regular appearance somehow. Fans like it because when they go to see one of their concerts, you never know what to expect from them. Twenty One Pilots seems to always be out to be doing something different from many other performers, and that comes out in their live shows.

– Extremely Musically Talented
Both Tyler Joseph and Josh Dun are not only a cool visual experience to see live, but they are also VERY talented when it comes to music. Not only do they write their own stuff, the fantastic duo can play an impressive amount of musical instruments. To name a few, drums, bass, keyboards, trumpet, ukulele, tambourines, along with other brass instruments. It’s pretty amazing how just two people can sound so full and complete. Yes, some of their cuts of vocals and different sounds are digitized and tracked (playable at a touch of a button), but it really is something to hear and see it once it’s all put together. very talented couple of guys.

– Always Plays Old & New Songs For All Fans
How many times has it happened where you go to see a concert of a band you really like, but they play only their ‘newer’ songs, and mostly disregard their older ‘stuff’? Stuff that made them what they are today, stuff in which all the original fans fell in love with that turned them onto the band in the first place. Well, with Twenty One Pilots, you don’t have to worry about that happening. The musical duo make sure to include as much of their early music, as well as their newer stuff. This way no matter when you became a fan, you will definitely hear songs you know and live. We thing that it’s very cool for a band to go out of their way to do that.

– Very Cool Visuals and Lights
With the band being more successful than ever, they seem to finally have the funding it take to put on one hell of a visual performance. We’re talking all the goodies; Strobe Lights, Colors Bars, Color Splashes, Wild Visuals, Huge Digitized Backdrops and anything else you could imagine. Now they are able to provide a complete experience with visuals and music.

If all these points don’t make you want to go out and see Twenty One Pilots live in concert, then I don’t know what will. The band is actually on tour right now and you can find out all the latest Twenty One Pilots tour information at our Twenty One Pilots Tour Page. You can check their tour schedule, look for tickets and more!

Don’t miss your chance to see the extraordinary Twenty One Pilots (21P) live in concert this year!