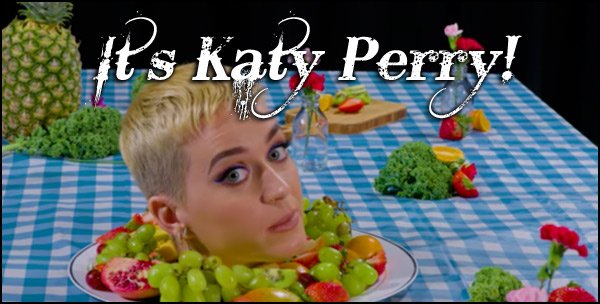 This past weekend, anyone that visited New York’s Whitney Museum of American Art were ‘tricked’ into participating in a spoof art exhibit that was sure to surprise just about anyone. People that agreed to go along were led into a dark room featuring a long dinner table covered with a blue checkered picnic tablecloth, a smattering of fruits and flowers. There was just one more thing, Katy Perry’s actual head on a platter! (Watch The Video Below!)

The art goof was the latest edition of Derek Blasberg’s video series “Derek Does Stuff with a Friend,” a partnership with Vanity Fair. The goal of the session is to horrify random museum visitors by placing them in real-time face-to-face with a pop star’s floating head assembled to look like some unlucky visitor’s main course. “The artist is called Katheryn Hudson,” Blasberg tells a group of participants while introducing them to the faux art installation. (Hudson is Perry’s birth name.) “It’s a kind of rumination on the feast of life and everything we have to eat. And the two-faced capitalist system we are currently living in.”

“Hi guys!” Katy Perry then says like a crazy person as various crowd members slowly realize what’s exactly going on. She then adds, “Buy my new single!” … Does Katy Perry really need to do this kind of ‘stunt’ to sell records? We definitely do not think so, although it was obviously done to help promote her latest album. The whole “I’m a sexy food” thing seems to borrow from Perry’s recent music video for “Bon Appétit” (Watch Video Below) which features Katy Perry being kneaded, breaded and boiled in a nude-colored body suit, although no matter what is done do her, she doesn’t appear to feel any pain or discomfort. Eventually, it is revealed that Perry has been in cahoots with the chefs the whole time, and ends up rebelling against the rich diners poised to cannibalize her, feasting on them instead. Thus the title, Bon Appétit! Some museum visitors were visibly confused at the whole thing, but there were some that took the situation lightly.

Museum goer’s got the surprise of a lifetime when Katy Perry’s live head was on display.