Tell the following Musicians to play their music and stay out of politics! This is not why we like you.

By now you can tell that politics have taken a ‘strange’ turn within the past couple of years. Many people have stood up to voice their opinions and exercise their First Amendment rights. This is a great thing, as long as it’s not violent and no one at all gets hurt. Freedom of Speech is a wonderful thing. Although many must realize that with this Right, comes lash back. Of course it’s OK for people to speak their minds; Who are we to tell someone to not express their opinion(s)? So there are many people from all walks of life, that have done just that. Again, be prepared for lash back, depending on who you are and what you’ve said. This is usually a very fine line to walk. Yet there are those in the music industry that find it 100% necessary to not only verbalize their political stance, but to even go much further and even slander, push unproven propaganda, openly oppose and much of that then gets transferred to their fans.

We’re seeing this ever so prominently today with President Donald Trump, and entertainers such as Bruce Springsteen, Roger Waters (from the band Pink Floyd), Todd Rudgren, Madonna, Lady Gaga, Cher, Bono, Miley Cyrus, Corey Taylor, Tom Morello, Green Day, Katy Perry (and MANY more) ; all of which who USE THEIR MUSIC PLATFORM to spread their blatant hatred. Bruce Springsteen even wrote a song dedicated just to that, and most of a Roger Waters show is an outright Trump bashing ceremony. I actually think it’s disgusting that these ‘entertainers’ need to use their fame, their popularity, and their position to do this. First of all, people paid to see you in concert, don’t waste the time whining about politics, PLAY YOUR MUSIC! Second, your political view is NOT what made you famous and that is not what ‘filled the house’ tonight, so do what made you famous and PLAY YOUR MUSIC. Todd Rudgren just said in an interview that if any of his fans are Trump supporters, then they should stay home and not come see his concert. Well Mr Rudgren, what would you do if half of the crowd doesn’t show up that night? What an ignorant thing to say and yet eventually he’ll back pedal and apologize  when his record sales get even poorer. So why say anything at all?

We also saw this years ago when the Dixie Chicks did this with then President Bush, it ended up alienating the band from half their fans, while forming a stronger bond with the ones that stayed. Look, there is nothing I can say that can change these people’s minds. Some of them are so filled with blind hatred that there is nothing that can budge them, and that’s sad. Then they FORCE their views on their fans, alienating many, and that’s sad. Why can’t you just do what made you who you are today, and that’s play music. Sing your songs, Entertain us with your music. NO, these handful DEMAND we must listen to and obey their political spewings. Yeah, I don’t think so. Mark our words, this will ruin careers, and we are not talking about ours. 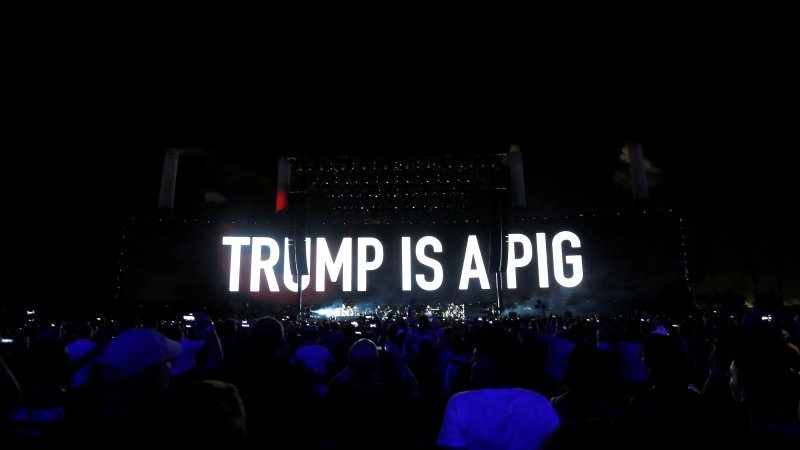 Music & Politics do NOT Mix! This shot is taken from a Roger Waters concert. Shame Roger, Shame!

Just some of the artists in ‘music’ that have used their popular position to blast The President of The United States.