Bob Seger is back, baby! 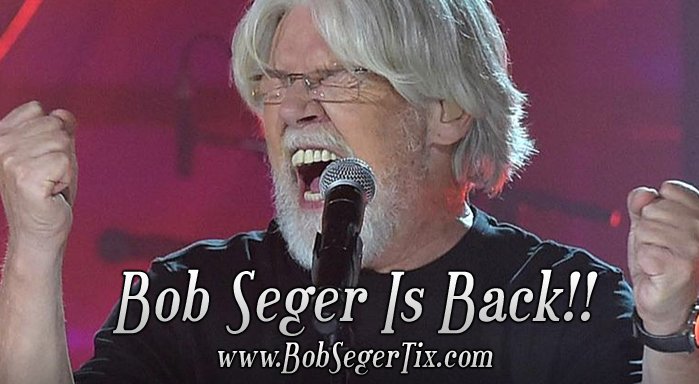 Last year was a bit of a scare for Bob Seger due to a personal health issue that sidelined him in the middle of his concert tour. He and the Silver Bullet Band were going strong during their tour last year when all of a sudden fans got bad news that they weren’t prepared for. The concert trek that Bob Seger was well on his way on, had to be put on hold, and all the remaining dates were postponed. They were not canceled, which is a good thing for ticket holders and fans, they were just postponed until further notice. That meant that your tickets were still good and to not throw them away. Fans waited as some news swirled about the possibility that Bob Seger may never go back on the road. His injury happened right in the middle of his Runaway Train tour and the injury happened to his back. There was no time frame released about his coming back to finish his concerts, but fans waited with bated breath to, first and foremost, make sure that Bob Seger was going to be OK, and of course see when the shows would continue on. That wait is no longer. Bob Seger just announced that he will be back on the road on tour beginning in November, and will continue to make up the missed shows until the end of February of 2019. Will there be additional shows added? Will he extend his tour to new cities and venues? This we do not know yet, but I will tell you one thing, there’s a ton of people that want him to. There are no shortages of Bob Seger fans and there’s no doubt that people would love for him to perform in more cities. On our Bob Seger Tour page, you’ll find the latest schedule for Bob Seger and any other information about his shows that you may need. Here’s to him staying healthy and continuing to tour.

Bob Seger is back and will be finishing up his Runaway Train tour. Hopefully no one threw away their tickets.