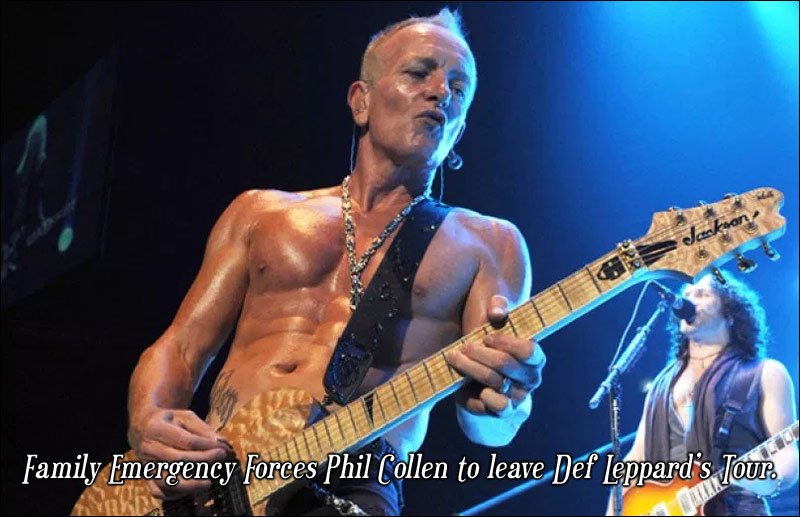 Phil Collen, the lead guitarist for the band Def Leppard, has unexpectedly left their present tour with the band Journey, due to some sort of family emergency. This information come to me through Blabbermouth and we are awaiting an official statement from the band Def Leppard themselves. The tour only began about a week ago, yet with Phil Collen missing from last night’s concert, we saw Steve Brown of the band Trixter had taken his place on stage. We are not sure if Brown will be a permanent replacement for Phil Collen while he is away dealing with this emergency issue, or will they bring in other guitarists to fill in. Only time will tel on that, and also when Phil Collen will return to the band.

Several news outlets have reached out to the publicist of Def Leppard, but as of this moment, no official statement has been released. Steve Brown is no ‘newbie’ the the band Def Leppard, he actually took the place in for Vivian Campbell for a few shows back in 2014 and 2015 when Campbell was going through treatment for Hodgkin’s lymphoma. Trixter has been on tour with Def Leppard back in 1992, two years after they had broken through with their self-titled debut, which actually went gold in the United States. “Those guys are like family to me,” he told Sleaze Roxx in 2017. “Most people don’t know this but I go back with Def Leppard to about 1988 when they were touring behind Hysteria. Phil Collen is a like a brother to me. When Vivian was diagnosed with cancer in 2013, Phil said to the Leppard guys, ‘I have the guy that can step in while Viv is undergoing treatment. Let’s call Steve.’ … So I got the call in early 2013. I learned the entire set and fine-tuned my parts and began playing some gigs with them in 2014.”

Again, as of the time of writing this, we have no official news from Def Leppard, or any of their representatives. All of us here, in addition to all the fans, are praying and hoping for a quick return for Phil Collen and that everything and everyone is OK and healthy.

Phil Collen has taken an unexpected leave of Def Leppard just as their tour began with Journey. Hopefully he will return shortly.