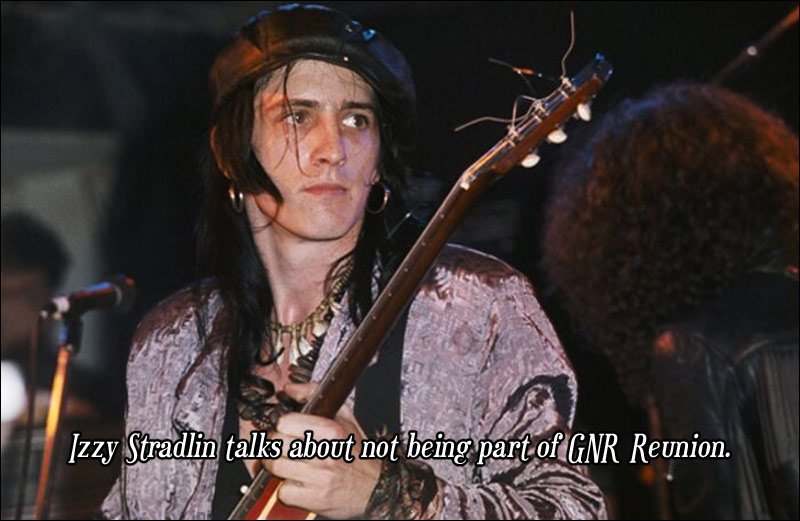 Last year when word got out that Guns N’ Roses would be reuniting and going on tour, all fans, including myself, went absolutely bonkers. Of course we all expected something to happen which would prevent the reunion from happening, most likely some sort of antic done my Axl Rose would have been my guess (only because of his past history towards the end of the band’s existence; not showing up for gigs, or showing up really late and being trashed), but to all of our surprise, the reunion and it’s shows went off without a hitch, although there were a couple of things missing. Steven Adler, the band’s original drummer, and Izzy Stradlin, the band’s 2nd guitar man who really was a big part of the guts of the band. Izzy was responsible for some of the band’s biggest hits, including Sweet Child o’ Mine, Double Talkin’ Jive, You Ain’t The First, Dust N Bones, Out Ta Get Me, Don’t Cry, Pretty Tied Up, 14 Years, Mr Brownstone and Patience (along with more).

When asked, Izzy Stradlin has blamed his non-inclusion with the Guns N’ Roses reunion tour on the fact that he and the other guys in the band were unable “to reach a happy middle ground through the negotiation process.” The media was also told that “The current GN’R tour has been a great success for the guys. My non-participation was simply not being able to reach a happy middle ground through the negotiation process. That’s life. Sometimes things don’t work out.”. If you were not aware, it was Izzy and a good friend of his named Rose that co-founded the band Guns N’ Roses back in 1985. He was present (and a big part of) their first album ‘Appetite for Destruction’ back in 1987, and then their next two albums Use Your Illusion I and II in 1991, but then left the band a bit later in 1991. At one point in 2016 when Axl was trying to give an explanation to the media about why Izzy left and is not part of the present line-up, Izzy struck back and said “bullsh*t!” and went on to explain that the band didn’t want to “split the loot equally.” ….. We are not sure of exactly what happened, we just know that they could not reach an agreement, thus Izzy never rejoined them.

Throwback picture of Izzy Stradlin while he was part of Guns N’ Roses early on in their existence.