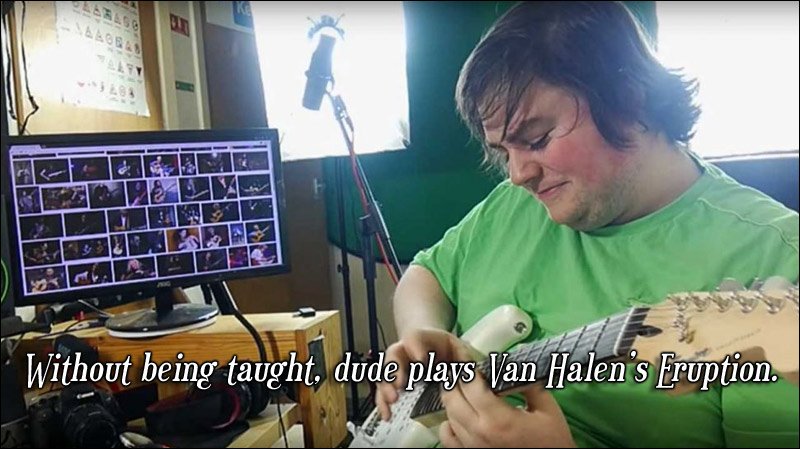 Van Halen‘s wordless song Eruption was released on their first album back in 1978, and it literally blew everyone away. No doubt that it put Eddie Van Halen on the map as one of the most talented rock guitarists people have ever seen. The song requires some of the quickest and most accurate guitar fingering imaginable, and for years many guitar players have tried to just come close to it sounding like the original thing. Many have failed, but here comes an internet sensation that should be going viral by now. There’s a YouTube user out there named Kmac2021 who recently released a personal video of himself, who has never been taught how to play Eruption, pick up a guitar and crank out a great rendition of the amazing original. In fact it’s quite impressive to watch and listen to Kmac2021 do his thing knowing that he’s never learned to play the song. Some people have a talent which allows them to just listen to music, and then be able to recreate it without any former training. It’s quite obvious that Kmac2021 has some of this ability.

We haven’t heard a response from Eddie Van Halen, or any of the other band members, but we’re sure the’d be impressed. Yes, it’s a bit sloppy and off key in certain places, but overall it sounds great. Take a listen for yourself, the video should be posted below. Leave a comment too so we know what you all think about it. The video is below the still picture, watch it and listen, then comment your opinion below.

Without being taught how to play it, YouTuber Kmac2021 picks up guitar and cranks out Van Halen’s Eruption. Check out the video below.


Watch as this young man, aka Kmac2021 on YouTube, plays Van Halen’s Eruption, without ever being taught it.