P!NK Allows 12 Year Old Girl To Sing At Her Concert 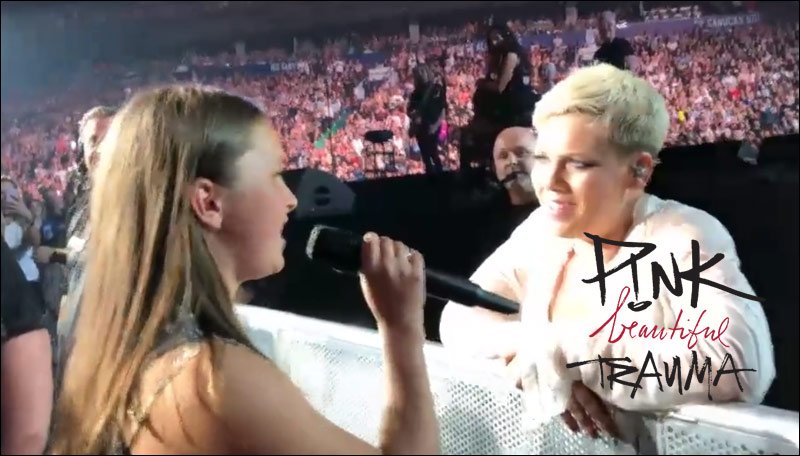 For most people, it’s only a fantasy or dream to be able to participate in and/or be part of a P!NK concert. For one 12 year old girl, that dream came true, and it was a wonderful thing to see and listen to. It took place in Vancouver at P!NK’s concert there back on May 12th. About two weeks before that, a video posted on Twitter by a 12 year old PINK fan named Victoria Anthony caught the eye of P!NK herself. The young woman (not yet a teenager) sang a few samples of her incredible voice and posted that she really wants to sing at PINK’s concert. It caught the eye (and ears) of multiple news outlets, and a lot of other people. Before you knew it, the video was viral and P!NK caught wind of it.

At the actual concert, PINK must have noticed or recognized Victoria in the audience and P!NK proceeded to hand over the mic. Although Victoria was not physically on stage with P!NK, they were only a couple of feet apart when she received the microphone and began to sing for P!NK and the crowd. P!NK was instantly blown away, along with a good portion of the audience. Victoria cranked out a perfect solo version of Pink’s hit “Perfect,” receiving a huge applause from the crowd and a stunned response from PINK herself. Judging by her reaction, it’s safe to assume Pink thought Anthony was pretty “perfect” herself. “Thank you for that,” the still-amazed Pink said after returning to the stage. “How do you follow that?” she said to the audience.

Watch Victoria Anthony give Pink a run for her money in the video below!

Here’s a picture of the event as Victoria sang for P!NK. Watch the full video below!


VIDEO – 12 Year Old Sings For PINK at one of her Concerts :