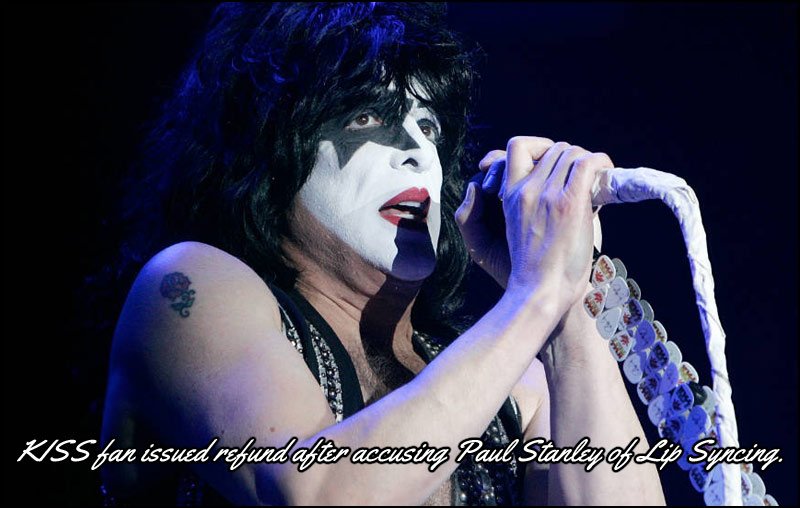 A fan of the band KISS has made the accusation that he witnessed Paul Stanley lip-sync to at least one of the band’s latest live concert shows. The fan then proceeded to receive a refund because of it, according to Eddie Trunk of SiriusXM. You can listen to Eddie Trunk discuss the situation in the video found below. KISS fan Arch Hall wrote to Eddie Trunk about the event, he wanted to “find out how many ticket buyers have requested a refund due to terrible performances” before he went and approach the musicians themselves. His letter continued “With bands like KISS for example, Paul Stanley’s atrocious vocal performances would seriously upset me if I paid a substantial amount for a ticket and sit through some of the things I’ve seen uploaded to YouTube.”. After reading the letter, Eddie Trunk proceeded to respond “You’ve singled out KISS here but as far as what’s going on there it’s well documented and it’s all over YouTube. Constant examples and proof that Paul is singing to a track. He has a track assisting him in his live performance. All you gotta do is Google that, YouTube that and there’s a million — eventually they pull these videos down because they’re so incriminating but it’s been proven a thousand times online. So, he’s not gonna sound all that bad on this tour because he’s using a track!”

Eddie Trunk went on to say, “I know a guy who spent a grand on four KISS tickets, in Boston, had never seen the band before, saw this stuff on YouTube that he wasn’t gonna get a full live performance, went to Ticketmaster and said, ‘I paid for live, this not fully live, I want a refund.’ Twenty-four hours later, Ticketmaster issued the refund. That is interesting. This person sent me an email about it, this is a guy who is also in the business so this is not just a fan who is just trying to stir the pot.”

If you want to hear Eddie trunk discuss this, there’s a video below containing the audio clip of the discussion. There’s no denying that Paul Stanley does use backing tracks to ‘back up’ his voice on their live performances, but it’s not like KISS uses the lip syncing process on the main front voices in their live shows. Supposedly ‘lots of bands do the same thing”.

A fan at a recent KISS concert complained of witnessing Paul Stanley lip sync to some of their live songs, and Ticketmaster went as far as refunding the cost of the tickets. Listen to SiriusXM’s Eddie Trunk discuss the issue in the video below.