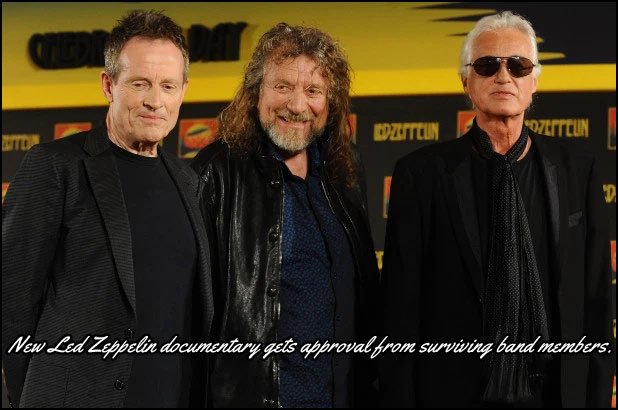 Each of the three surviving members of the classic rock band Led Zeppelin have given their OK to a new documentary about the band. Robert Plant, Jimmy Page and John Paul Jones all gave a confirming nod to a new documentary that celebrates the band’s 50th anniversary. While the documentary is still yet to be titled, it is in post-production stages and will make it’s first appearance at the Cannes Film Festival. It is being directed by Bernard MacMahon and all three surviving band members have already given full interviews that will be part of the new documentary. The movie is guaranteed to include interviews with the three surviving members, plus rare archival interviews with late drummer John Bonham, previously unseen film and photographs, interviews with other artists and high-quality audio transfers of the band’s music. Robert Plant and Jimmy Page praised MacMahon’s past work on “American Epic,” the Emmy-nominated 2017 documentary that chronicled the early American roots music recordings of the 1920s. “When I saw everything Bernard had done both visually and sonically on the remarkable achievement that is ‘American Epic,’ I knew he would be qualified to tell our story,” Page said (via Variety). Plant added, “Seeing Will Shade, and so many other important early American musicians, brought to life on the big screen in ‘American Epic’ inspired me to contribute to a very interesting and exciting story.” John Paul Jones added, “The time was right for us to tell our own story for the first time in our own words, and I think that this film will really bring this story to life.”. I don’t know about you, but I do know that I am extremely excited to see it when it comes out to the public.

Jimmy Page, Robert Plant and John Paul Jones all give their OK on a new, upcoming documentary about the band Led Zeppelin.