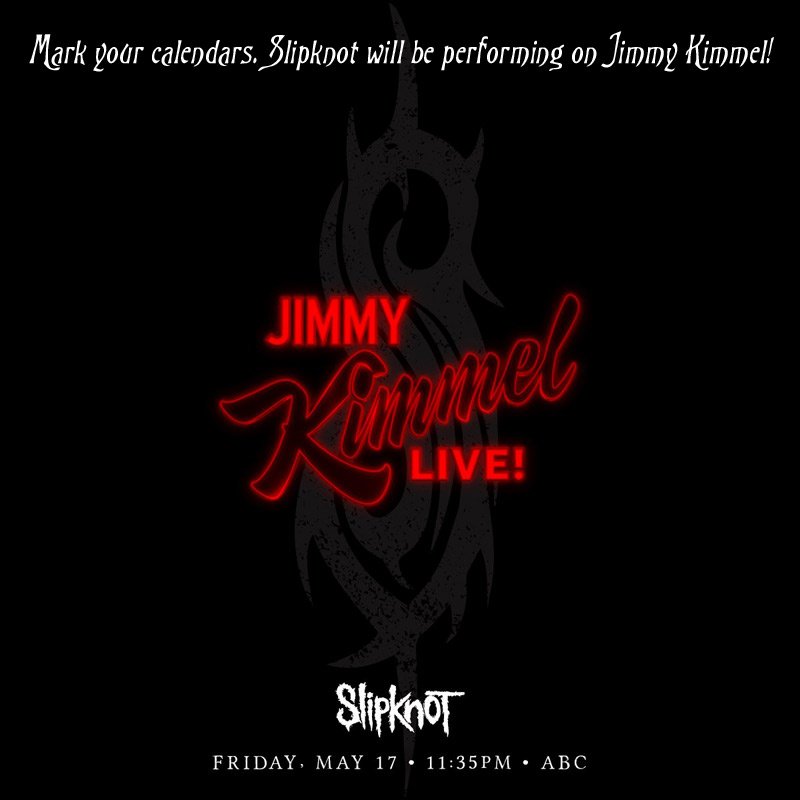 Mark your calendars metal heads because on Friday, May 17th, you’re going to want to watch the Jimmy Kimmel Live! show on ABC. Why you ask? Because it’s going to be one heck of a show due to the fact that SLIPKNOT will be performing on it. Trending right now on Twitter and other social media sites is the hashtag #WeAreNotYourKind and it’s referring to the ‘mini-concert’ that Slipknot will be performing on the Jimmy Kimmel Live! show. Fans of the band are already excited at the news that their favorite metal band will be on tour this summer on their #KnotfestRoadshow trek, but now the excitement has just reached a new level. Broadcasting on the network ABC across North America on the evening of Friday May 17th at 11:35pm will be the ‘first show’ of the Slipknot summer tour. While it won’t be a full concert, it will also not be just a one song performance. While you can request tickets to the show, we highly doubt that you’ll be able to get them. Since the show is being broadcast on ABC, you will be able to watch the life performance from the comfort of your own home. The event is being billed the “Kimmel Slipknot Outdoor Mini-Concert” and it will mark Slipknot’s first live performance since November of 2016, and get this, it will be the first time we will all get to see the band’s terrifying new masks. I don’t know about you readers, but I am excited as can be. Don’t forget to set an alert on your smart device so you don’t miss this and if you can, we would recommend recording the show so that you can watch it again and again whenever you feel the need. ABC on Friday, May 17th, at 11:35pm.

Big night coming on Friday May 17th as Slipknot will be performing a small mini-concert on the Jimmy Kimmel Live! Show.