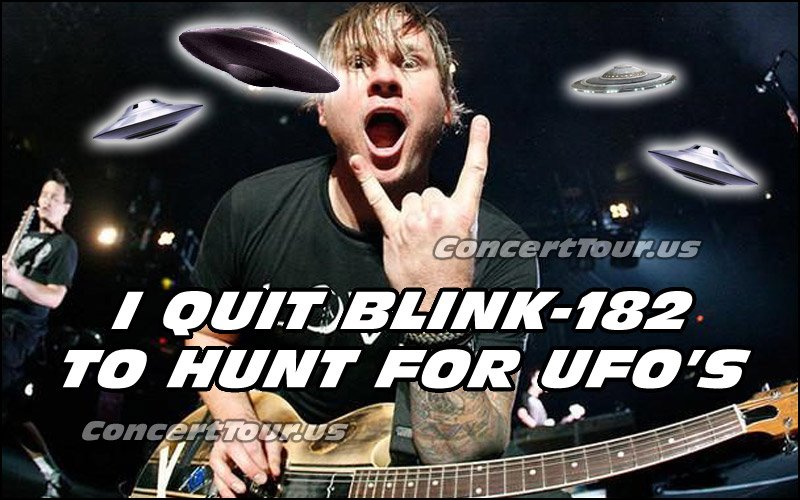 OK, well it’s not really UFO hunting, it’s more like UFO research. When Tom DeLonge left the mighty band Blink-182, it affected a lot of fans. Many of them were huge fans of the band, and of Tom DeLonge himself. Usually, you have a band member break out of the band due to one or more of several reasons; Some are Ego Issues, you also have ‘creative differences’, sometimes it is related to alcohol or drug abuse, and sometimes it’s nothing at all. But this ‘break up’ is definitely a strange one. Who’s ever heard of a band member leaving a band to go do research on UFOs (Unidentified Flying Objects). Well now you have! For now, no more will Tom DeLonge be playing his guitar or singing for Blink-182, but you can find him out ‘in the field’ doing his UFO stuff.

“I’ve always had a passion for outer space and the future,” Tom DeLonge, who just turned 40, said in a recent interview. “When you’re an individual like me, dealing with something that’s a national security issue, and you’re being gifted with the opportunity to communicate something you’ve been passionate about your whole life – something that has the opportunity to change the world over time – being a small part of that is enormously important for my life path. But I can’t do everything. I can’t tour nine months out of the year with enough time to do the enormity of what I’m setting out to do.”

Tom DeLonge, actually formed the band Blink-182 in the early 1990s. But his obsession now lies with something else. Will we ever see Tom back with his boys in Blink-182, I guess we will just have to wait and see. That’s if the ‘mothership‘ doesn’t come and take away poor Tom DeLonge from us.

Tom DeLonge claims he needs more time to focus on ‘the enormity of what I’m setting out to do’.


“I’m starting with the idea there’s been something else here all along,” says DeLonge. “There are two sides to looking for other forms of life. There’s one that’s looking at the interaction with humanity over a very long period of time. But there’s also advancing the idea that there was life or forms of life on Mars, on Europa, and even farther out – on exoplanets that look very much like Earth.”

There have been multiple times where we find Tom DeLonge speaking about his passion on extraterrestrial life, space and UFOs.