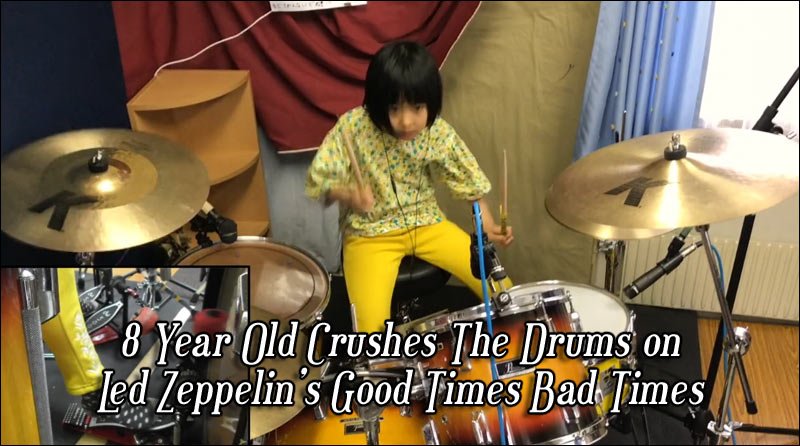 Yoyoka Soma‘s number one drummer is John Bonham of the band Led Zeppelin. She performed the drums on Led Zeppelin’s ‘Good Times Bad Times‘ as her entry for the 2018 Hit It Like A Girl drum contest. Her video clip did not end up taking top prize, but it did get her a spot in the final round of the competition. She also picked up a huge following of fans. She amazingly crushes the song with three foot pedals, with her polka dot socks putting in bass work. She’s even got the facial expressions and head banging down. The dampening of the cymbal is a detail only an experienced drummer like herself could add. You can watch her video below.

Soma has been playing drums since the tender age of 2. At 4, she started performing at concerts, and now she’s been on over 100 stages. She’s a member of her family band, Kaneaiyoyoka, where she offers keyboard and vocals in addition to drums. She even writes her own lyrics and music. “I want to be an artist who can do anything: playing all instruments, recording music, mixing the sound and designing the CD album jackets,” she said in a statement accompanying her entry. She’s even studying English, knowing that future world-wide tours will take her from Japan to all parts of the globe. “My dream is to be the best drummer in the world,” she said. Watch the video below and turn up your speakers.


『Hit Like A Girl Contest 2018』 Entry by Yoyoka Soma