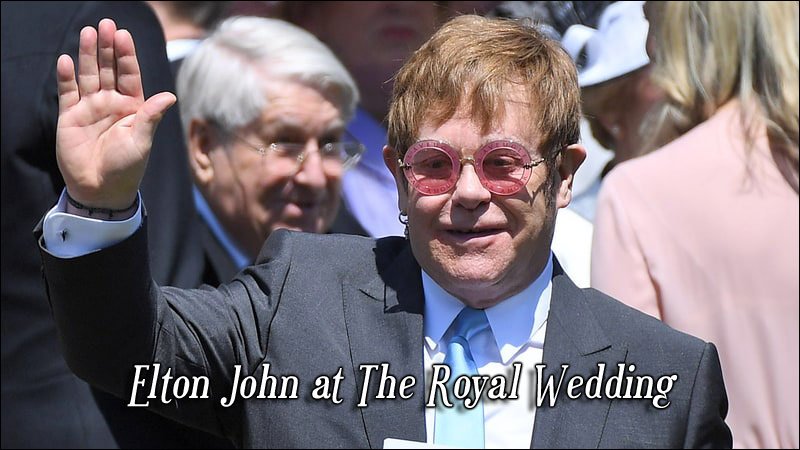 As predicted, Elton John not only attended but he performed during the lunchtime reception part that came after the ceremony of The Royal Wedding of Prince Harry and Meghan Markle. The iconic entertainer also attended the wedding earlier that same day in Windsor. According to the Daily Mail, Elton John performed after Prince Harry made a speech and then asked his guests, “Does anyone here know how to play the piano?” in which Elton John then sat by the piano and performed four wonderful songs, “Your Song,” “Circle of Life,” “I’m Still Standing” and “Tiny Dancer”; the latter song features the lyric “L.A. lady,” a reference to Meghan Markle’s acting career.

“Prince Harry asked Sir Elton to perform at the Reception which was hosted by Her Majesty The Queen at St George’s Hall, Windsor Castle,” Kensington Palace acknowledged in a statement. “Sir Elton performed for the newly married couple in recognition of the close connection he has with Prince Harry and his family.”

This was not the first time Elton John has performed for the Royal Family, he notably performed a slightly changed version of his “Candle in the Wind” at the funeral of Princess Diana, Harry’s mother, back in 1997. He reportedly is a close friend of the royal family. “I first met an extremely shy and sweet Prince Harry at a private lunch at Kensington Palace, given by his mother Princess Diana for Gianni Versace and me many years ago,” John has said. “What a joy it has been to see that young boy grow to inherit his mother’s warmth, sense of humor and courage to stand up and champion the causes he truly believes in.”

Elton John performed a total of four songs at the royal wedding of Prince Harry and Meghan Markle. He also attended the wedding.