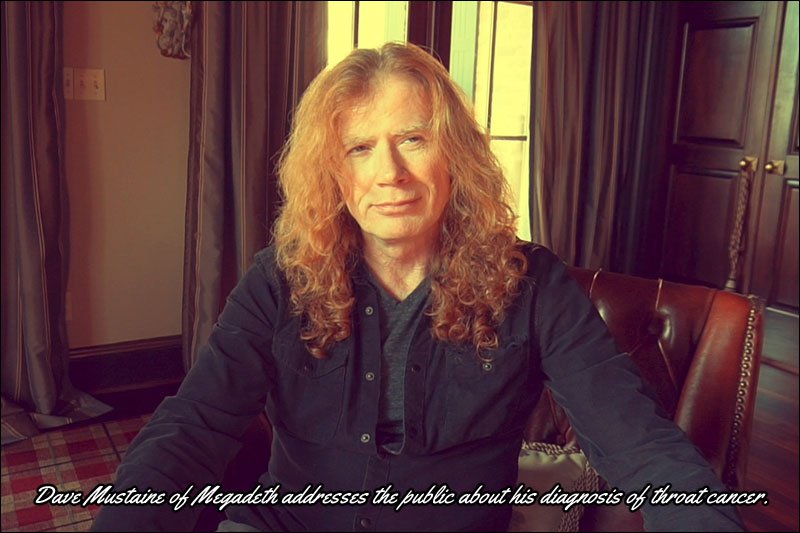 We all know him as the brilliant frontman of the band Megadeth, and also part of the original line-up of Metallica. Dave Mustaine has been in the music industry since 1978 and has more than proven himself as a solid icon when it comes to metal music. The growling, sneering frontman will be turning 58 years old this September but has just released some sad news. He’s been diagnosed with throat cancer, and will have to take a short break in touring and performing as he seeks medical treatment for his unfortunate condition. According to the statement released by Mustaine, his team of medical professionals has given him a 90% survival rate as his type of cancer is quite treatable. The full statement from Dave Mustaine was put out to the public on June 17th (2019) and can be read here :

“I’ve been diagnosed with throat cancer. It’s clearly something to be respected and faced head on – but I’ve faced obstacles before. I’m working closely with my doctors, and we’ve mapped out a treatment plan which they feel has a 90% success rate. Treatment has already begun. Unfortunately, this requires that we cancel most shows this year. The 2019 Megacruise will happen, and the band will be a part of it in some form. All up to date information will be at megadeth.com as we get it. Megadeth will be back on the road ASAP. Meanwhile, Kiko, David, Dirk and I are in the studio, working on the follow up to Dystopia – which I can’t wait for everyone to hear. I’m so thankful for my whole team – family, doctors, band members, trainers, and more.
I’ll keep everyone posted.
See you soon,
Dave Mustaine”

So far, millions of fans, along with a good portion of the music industry, have reached out to show their support and love for Dave Mustaine and his road to curing his cancer. If you can, I’m sure he’d appreciate it if you include him in your prayers as he seeks to beat the disease and get on the road to recovery. We hope to see you soon back on stage fronting one of the best metal bands to ever come along; Get Well Soon Dave!!

Dave Mustaine speaks about his recent diagnosis of throat cancer. … You can beat this Dave, we know you can!