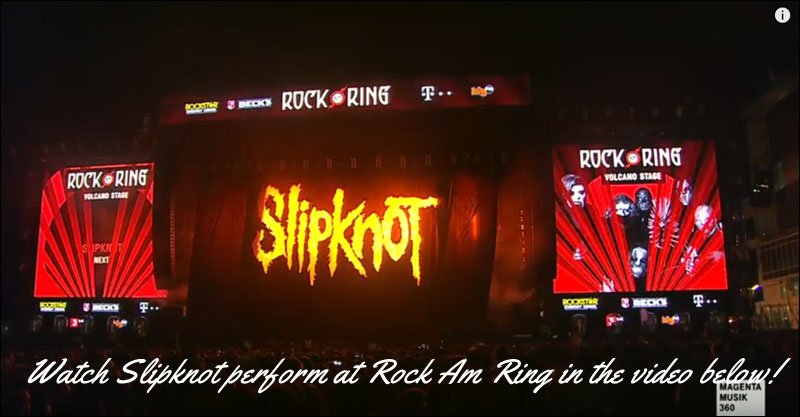 Slipknot began their European summer tour this past week when the metal monsters hit the stage at Rockfest which took place in Finland. Afterwards, the band made its way to Germany where they appeared at Hamburg’s Rock Im Park, then onto another headline show at Nurburg’s Rock Am Ring. The entire explosive performance of Slipknot was streamed live, but if you missed it, you’re in luck because it is still available to watch. Below you’ll find the video of their entire set. Slipknot’s setlist of their performance at Rock am Ring is also listed out below.

These European concerts are the band’s first full-length shows since they played Knotfest in Chiba, Japan, back in the end of 2016. However they performed recently last month with two songs on the Jimmy Kimmel Live show. Slipknot revealed their new masks in their video for Unsainted last month. Speaking about the follow-up to 2014’s .5: The Gray Chapter, guitarist Jim Root said: “This is the most time we’ve had to write a record and work stuff out together. One of my inspirations this time around was those artists that recorded full length albums – not just songs. While the industry is moving toward singles, Slipknot wanted to make an album experience, front to back.”


Slipknot Rock am Ring setlist (You can find the Video Below) :

Slipknot streamed their show from the German festival Rock am Ring. If you missed it, check out the video below.