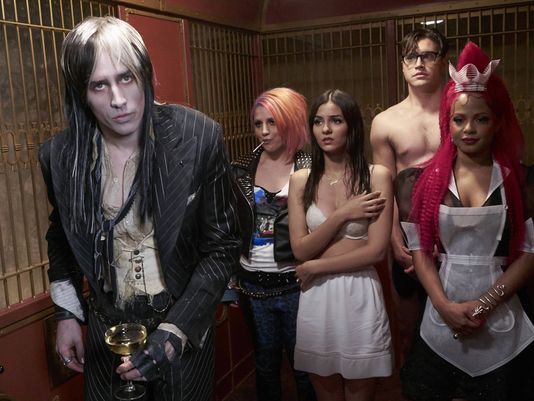 Fans at Comic-Con literally freaked out this past Thursday to a pre-screening of the first half hour of the Television revival of the 1975 camp film classic, The Rocky Horror Picture Show. They cheered and loved multiple elements of the first part of the two-hour Fox production, which is now set for an October 20 premiere, playing along with callbacks made popular during decades of midnight screenings. Some even waved cellphone lights during a rendition of There’s a Light by the naive, innocent Brad (Ryan McCartan) and Janet (Victoria Justice).

The clip closed with two of the original’s highlights, a Time Warp far more intricately choreographed than in the original and a dazzling Sweet Transvestite entrance by the new and much-awaited Dr. Frank-N-Furter (Laverne Cox), decked out in shimmery red dress, gloves and high heels. Both numbers drew hearty applause. The new film acknowledges longtime fans with scenes incorporating showing theatergoers responding to plot and character cues, a situation that has played out thousands of times in real life.

Cox, who wasn’t present Thursday, is “just truly a force of nature. She’s extraordinary. She has a five-octave range, a degree in dance, she’s an Emmy nominee,” director Kenny Ortega told USA TODAY after the panel. “The woman is so deeply gifted and (she) so surrendered herself to every moment in the making of this movie.” He also pointed out the significance of having Cox, a transgender woman, in the lead role, after an audience member talked about Rocky Horror screenings being a safe place where members of the LGBT community could just be themselves.

“As a gay man, it’s really important to me that I always have my eye on my community and I’m always doing my part to strengthen it and give it a lot of love and attention,” Ortega said. The new cast, which also includes Christina Milian as Magenta and Reeve Carney as Riff Raff, showed strong singing and dancing skills, but faces a tough yardstick in the inevitable comparisons to such indelible performances as Richard O’Brien’s menacing, out-of-control Time Warp yell or original Frank-N-Furter Tim Curry’s salacious, arch Transvestite performance. They remain the standards. (Curry now plays the stuffy criminologist who narrates the film.)

Lou Adler, a producer of both the 1975 film and the current version (with Gail Berman), was pleased and a little relieved by the audience response, in light of some fans objections after the remake was announced. He told the audience he decided to remake Rocky Horror as a TV movie because, “as we’ve seen in the last week or so, that there’s a lot of Brad and Janet’s out there that don’t go to midnight theater. I thought if we could get it to them, bring it to television, you could show them what they should know.”

“I had real anxiety. ever since we started the idea of making it, Adler told USA TODAY after the panel. He was pleased with the response of a Comic-Con audience he said was filled with “real Rocky fans. There was a guy in the back row who knew every callback. I was thrilled with the fact that they saw we never left the old one, and we used the fans to get to the new one. It was great.”