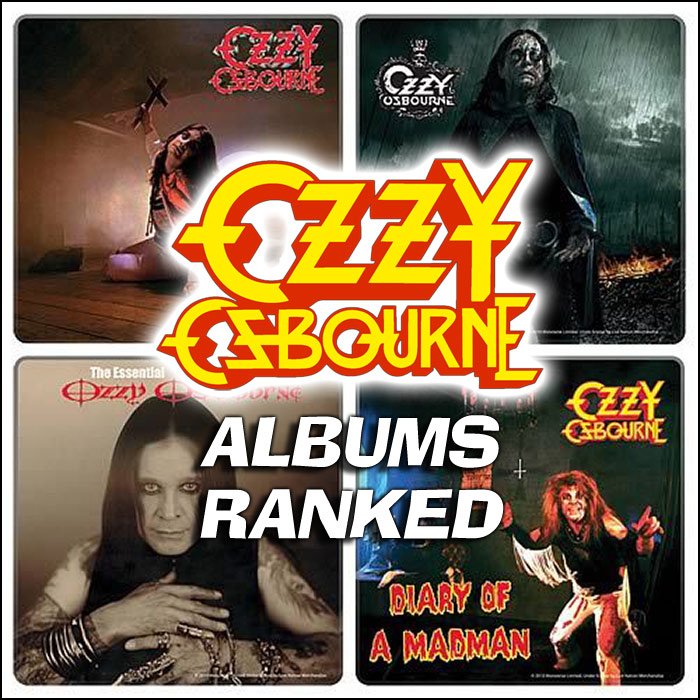 Today we are going to throw the spotlight on long time heavy metal lord Ozzy Osbourne. Putting aside any personal issues he’s had of late, we are going to take a look at what we think are his 10 best solo albums. As we all know, Ozzy has a huge musical library spanning from his days with Black Sabbath, all through his huge solo career. There’s way too much music to choose from, although when it came to picking his top ten albums, we think we did a pretty good job.

Below you will find listed in reverse order (from #10 to #1) of our picks of what feel are the best Ozzy Osbourne records (as a solo artist). After the list, we’ll put some cool Ozzy music videos for you to bang your head to, then you can leave a comment or two if you like. I’m sure we all have our own opinion as to which Ozzy albums we like best.

10. ‘Black Rain’ (2007)
‘Black Rain’ stands as a black mark on the Ozzy Osbourne discography. Enduring another six year drought between albums, the Prince of Darkness came back with his weakest album to date in 2007. The record would be the last to feature Zakk Wylde on guitar, seemingly caught between aimless mid-tempo plodding and formulaic soft and quiet moments. Lead single “I Don’t Wanna Stop” is anchored by a steady, anthemic beat, but wound up being all too predictable and, unfortunately, the best song here.

9. ‘Scream’ (2010)
One year before reuniting again with Tony Iommi and Geezer Butler in Black Sabbath, Ozzy released his 10th studio album, ‘Scream,’ in 2010. Though it was the first to feature Firewind guitarist Gus G., the axeman did not have a hand in crafting any of the songs here, as producer Kevin Churko teamed up with Osbourne to write the record. “Let it Scream” brought frenetic guitar playing and a throwback sound that hadn’t been entertained in nearly 20 years. The remainder is almost strictly rhythmically focused, but songs like “Let it Die” and “Diggin’ Me Down” took the sound in a new direction, which was refreshing despite its mixed results.

8. ‘Down to Earth’ (2001)
Between ‘Ozzmosis’ and 2001’s ‘Down to Earth,’ the original Black Sabbath lineup reunited, putting a freeze on Ozzy’s solo output. The frontman then regrouped his solo band, bringing Zakk Wylde back into the fold after enlisting Joe Holmes over the last six years. ‘Down to Earth’ starts off relatively promising with “Gets Me Through” and “Facing Hell,” both backed by sludgy rhythms and obvious studio effects laid over Osbourne’s voice. For the time, these two tracks fit the musical mold, but the album quickly fell apart afterward, struggling to vie for relevance when nu-metal had a stranglehold on the metal scene and offering little for fans still desperately clinging on to the ‘80s metal style.

7. ‘Ozzmosis’ (1995)
The mid-90s was an almost certain death sentence for any legacy act, now caught between grunge and groove popularized by Pantera. ‘Ozzmosis’ marked Ozzy’s return to the studio after a four year drought, though the time off did little to replenish the creative well. Songs like “Ghost Behind My Eyes” and “See You on the Other Side” are feckless cash-ins on the sounds of the time, counterintuitive for a singer dubbed ‘The Prince of Darkness.’ ‘Ozzmosis’ was not without its hits, however, bringing the “Mr. Crowley” Pt. II sounding “Perry Mason,” the lumbering “Thunder Underground” and the cleverly titled “My Jekyll Doesn’t Hide.”

6. ‘Bark at the Moon’ (1983)
Replacing the already iconic Randy Rhoads appeared to be an insurmountable task, but Ozzy struck gold once again when he landed supreme axeman Jake E. Lee. The guitarist immediately assuaged fans with the arresting jolt of the ‘Bark at the Moon’ title track, giving credence to the opening line “Screams break the silence / Waking from the dead of night.” Not lined with as many standouts as the previous two albums, “Centre of Eternity” and “Waiting for Darkness” are two of the criminally underrated tracks in the Ozzy Osbourne discography.

5. ‘No Rest for the Wicked’ (1988)
After sacking Jake E. Lee, Ozzy now had a streak of one guitarist per two albums. This would come to an end with the recruitment of 21-year-old Zakk Wylde, who would go on to be the longest tenured guitarist Osbourne ever had. Another world class talent, Wylde brought a more aggressive edge on ‘No Rest for the Wicked,’ aided by a thicker production. “Miracle Man,” “Crazy Babies” and “Breakin’ All the Rules” lead as the album’s singles, with “Bloodbath in Paradise” and “Fire in the Sky” also becoming fan favorites.

4. ‘The Ultimate Sin’ (1986)
‘The Ultimate Sin’ was one of the less popular Ozzy records around the time of its release, yielding just one powerhouse single in “Shot in the Dark,” which featured bassist Phil Soussan’s only writing credit. The record has held up surprisingly well, becoming a bit of a hidden gem in the Ozzy canon. Though they weren’t smash hits, the title track’s romping rhythm, the self-loathing of the delightfully catchy “Secret Loser” and the smirk-inducing “Thank God for the Bomb” make for an excellent Side A. The flip side dials back the intensity, backed by the power ballad “Killer of Giants.”

3. ‘No More Tears’ (1991)
Tied with ‘Blizzard of Ozz’ at quadruple platinum status is 1991’s ‘No More Tears.’ Sure, metal was beginning to fall by the wayside as the grunge era took over, but Ozzy kept the flag flying high and true on his sixth album and now entering the third decade of his musical career. Shaking off the ‘80s guitar playing a bit, “I Don’t Want to Change the World” and the ballad “Mama, I’m Coming Home” had a decidedly radio-friendly commercial flair and lyrical contributions from Motorhead’s Lemmy Kilmister. The instantly catchy bass line and signature descending guitar lead are the hallmarks of the lengthy title track, juxtaposing the concise and memorable “Desire” and “Hellraiser,” the latter two also featuring lyrics from Lemmy.

2. ‘Diary of a Madman’ (1981)
‘Diary of a Madman’ proved to be Randy Rhoads’ final contribution before tragically dying in a plane accident the following year. The bright production gives the fist-pumping opener “Over the Mountain” a significant boost, going seamlessly into “Flying High Again.” The back half of the record boasts a formidable one-two punch to close it out. “S.A.T.O.” is one of the most sinister Ozzy songs to date, taking the energy here and furthering the emotional weight with the melancholic title track.

1. ‘Blizzard of Ozz’ (1980)
Originally intending to form a new band called Blizzard of Ozz, Ozzy Osbourne’s first foray outside of Black Sabbath was released as a solo record, instead titled ‘Blizzard of Ozz.’ One of metal’s most famous and subsequently best debut records featured the electrifying playing of young guitarist Randy Rhoads. Helping to define heavy metal for the rest of the decade, the album brought the all-time anthem “Crazy Train” along with the controversial “Suicide Solution” and the haunting heft of “Mr. Crowley,” remaining Ozzy’s greatest album to this day.