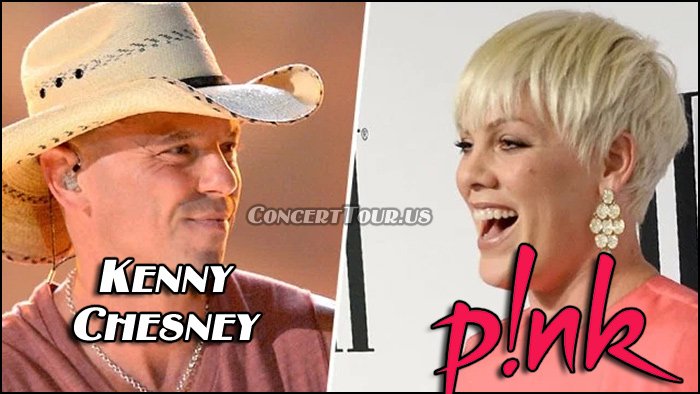 Kenny Chesney has a new album filled with new music on the way, although he’s waiting a bit and pushed back the album release to a late October so that everything will be just right. This is because Kenny Chesney arranged a strange duet with his new friend P!NK and he asked P!NK to duet on one of his songs. Due to this, Kenny Chesney’s upcoming album ‘Some Town Somewhere‘ will not be available until October 28th.

After listening to one specific song he intended to include on the album, “Setting the World On Fire,” Kenny felt it missing something special. He decided it needed a female voice, and turned naturally to his budding friendship with singer P!NK.

“P!nk’s voice holds so many feelings all at the same time: joy, desire, a bit of toughness, a little hurt,” he said of the pop star in a press release. “She’s an incredible singer – and has this great tone that shines but has a little wear to it, but doesn’t sound beat up. So I called her.”

Kenny Chesney continued on to say, “The great thing about P!NK, way beyond what a great and talented singer she is, is what a generous, loving spirit she has. To me, great singers are the ones who can get inside a song and capture the spark. When you hear P!nk on this song, you believe her–and to me, that’s everything the song required to come to life.”

Even though recording and adding the duet with P!NK would mean a delay in the album’s release, Kenny Chesney (and everyone else) knew it would be worth the wait. “Sure, it would be easier to just leave everything on schedule,” he said. “But when you have something you know is great, and it captures the best part of being alive, why wouldn’t you slow down enough to make it happen in the moment? That’s what ‘Setting The World On Fire’ is all about – and I figure it may be a while before I make another record, and I don’t want to wait to share this because it’s so good.”

Kenny Chesney puts the release of his new album off until he can finish recording with P!NK

MUSIC VIDEO – P!NK – Just Like Fire (From the Original Motion Picture “Alice Through The Looking Glass”)