Yes, Kid Rock is going to be running for Senate, and here’s what we know 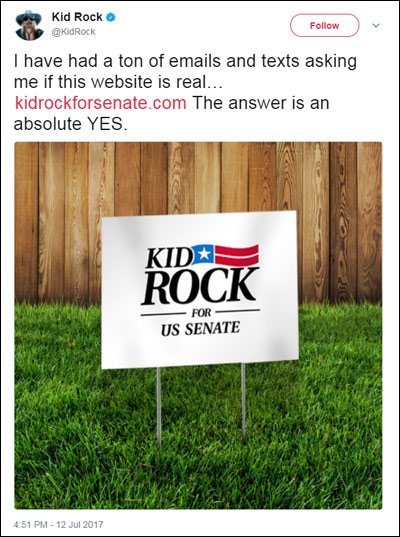 Similar to when Donald Trump announced that he was going to run for President of The United States, and the left leaning media laughed out loud, we now have another celebrity that appears to be entering the political ring. Lately, more people in entertainment have involved themselves in real-time politics, ranging from simple protesting, all the way to running for political offices. If you look at things from the right, you’ve lived through 8 horrifying years of Obama pushing our country to the brink of destruction and now it’s time that celebrity conservatives are starting to speak up. It doesn’t seem to matter whether they’re musicians, TV stars, actors, entertainers or business owners; the American people listen. One big-time celebrity has just shocked the entire music industry (and the entire political LEFT) by announcing that he will be running for Senate. The liberal news media outlets have tried to ignore him, they’ve tried to make fun of him, but many supportive conservatives have already spoken up and given their nod for the country singer. Who is he?

You heard correctly, KID ROCK will be running for a seat in the Senate!

His real name is Robert James Ritchie, but he’s better known by his stage name Kid Rock. A celebrity since he showed up in our lives back in 1990, Kid Rock is a hard-line conservative, an attitude that can easily be seen (and heard) in the music he writes and sings. Within the past 25+ years, Kid Rock has achieved massive commercial success and fame. If you add up his record sales of his 1998 album, “Devil Without a Cause,” all the way up to his latest album, which was released in 2015, the rock and roll country icon has sold over 35 million records world wide. Although his next big job to tackle is not in the music studio, it’s on the floor of the Senate. In the past, Kid Rock has hinted at doing exactly tht, but now the wheels are actually in motion. To shoot down the #FakeNews from the liberal media that this is all a joke, Kid Rock wrote on his Facebook timeline :

“Once again, the press is wrong.”

“First of all, I’ve got 15 days from my announcement to file paperwork with the FEC! Second, I’m not signed to Warner Bros!!! – which simple fact-checking would have revealed.”

Kid Rock did confirm that he will also not forget his musical fans. he will continue to release albums while running for Senate, much like how politicians release books during their own campaigns.

“I have recently worked out a unique deal with BMG, Broken Bow, CAA and Live Nation to release music ON MY TERMS.”

“Like politicians write books during their campaigns, I’m planning on putting out music during mine and IT ALL STARTS TONIGHT AT MIDNIGHT!”

“It’s not a hoax, it’s a strategy and marketing 101! No plans for an album or anything else that has been the usual norm in the music business OR politics…”

He was sure to address his would-be political opponent, longtime Senator Debbie Stabenow, who’s famous for her far left politics. Kid Rock promoted that he will be “…a voice for tax paying, hardworking AMERICANS,” and ended by saying that he’s sick and tired of the politicians and their “bullsh*t!”