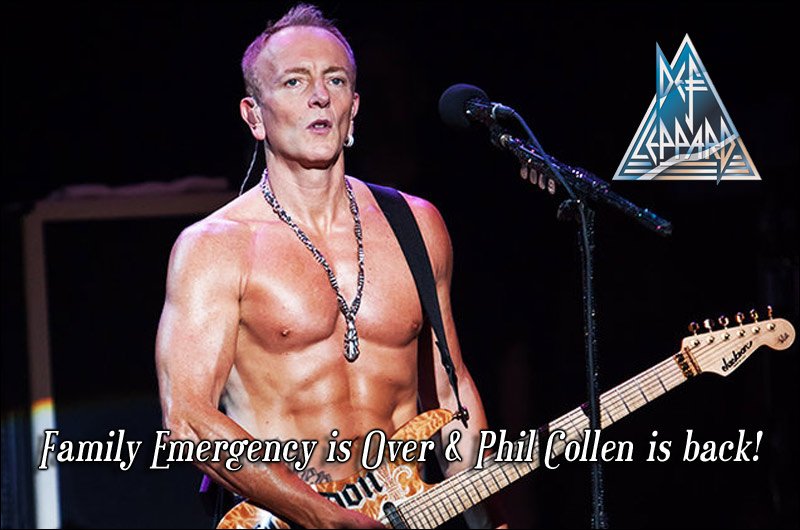 When word came out several weeks ago about lead guitarist Phil Collen of Def Leppard leaving their present tour with Journey, fans were shocked. The only explanation given at first was that it was some sort of family issue, but not much more was known; Until now that is. It turns out that the wife of Phil Collen was pregnant with their son Jackson and her pregnancy ran into complications during her time of giving birth. Phil Collen left the band’s tour after their May 23rd performance at Times Union Center in Albany, NY. The guitarist was just recently interviewed by radio star Mitch Lafon and said “She actually died and they brought her back to life, [There was] internal bleeding and just craziness. … So I was actually on tour and when this happened. I obviously had to go to California [to be with her].”

Instead of shutting down the concert tour, Def Leppard asked Trixter guitarist Steve Brown to fill in for Collen, beginning with the May 25 show at HersheyPark Stadium in Hershey, Pennsylvania. The circumstance was one with which everyone involved felt comfortable, since Brown had filled in for the band’s other guitarist, Vivian Campbell, when Campbell received treatment for Hodgkins lymphoma in 2014 and 2015. According to Collen, Brown was well prepared for the gig, even with the short notice. “I said, ‘Steve, I know you know Viv’s parts,’” Collen recalled, noting that Brown “sings great; he can do all of this stuff. So he learned my parts, and my vocal parts, which is more serious than the guitar parts, I think. In our band, we have backing vocals — it’s an instrument…. So it was a no-brainer. And I said, ‘Can you step in for me?’ Everyone was cool; they said, ‘Go.’ I went, and everything was fine.”

“When your friends or you family need help, you do what you need to do to make it happen,” Brown told Lafon. “When I got the call, [I said] give me an hour to pack my bags, and I was up in Albany, N.Y., within four hours.” Brown filled in for three shows, and Collen returned to the tour on May 30. “Everything’s fine,” drummer Rick Allen told iHeartRadio. “He’s got a beautiful son, so everything went really well.”

Phil Collen had a family emergency which pulled him away from the Def Leppard tour, but he’s back now and all is fine.