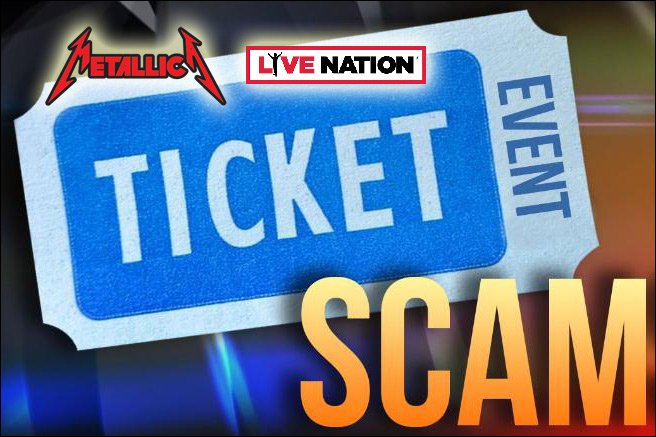 If you ever wondered where all the concert tickets go when an event sells out very quickly, we think we found out the answer. When it comes to Metallica at least, we recently found out that a lot of the tickets directly by-passed fans and the public by being given directly to ticket resellers, and it was an inside job that did it. It’s been reported that people that work for Metallica (and other groups) used secondary ticket websites to sell tickets in bulk at higher prices than face value. Rumors have swirled for years about the secondary ticket market and inside ticket deals, but there hasn’t been any real hard evidence, until now that is. The people that have been responsible for these actions aren’t stupid, they are aware of the fact that what they were doing was highly un-ethical and illegal, but the dollar signs out weighed the risk they were taking. In a phone call that took place back in 2017, Bob Roux, who is the Live Nation president of US concerts, said to an anonymous event promoter: “When this happens, 4,600 tickets into a single account, there may be some eyebrows that get raised.”

Live Nation representatives admitted to reporters that the company has been involved in the transfer of concert tickets directly to resale outlets in this manner throughout many years, however the excuse they gave is that they have done so only at the request of the touring artist. The artist on tour is basically in control of where their tickets are first sold, however many performers allow other members of their team to make those decisions. A Metallica employee told journalists that the members themselves were not informed of the practice, as the band had handed those responsibilities over to a person named Tony DiCioccio, who was considered a ‘ticket consultant’ for the band. Supposedly DiCioccio was motivated to move Metallica tickets to secondary resale platforms after the band opened Minneapolis’ US Bank Stadium back in 2016. He made a handsome profit when over 10,000 tickets were sold “on the secondary market without the band’s participation.” “After seeing the volume of secondary transactions for that show and the benefit being captured by brokers,” Live Nation told Billboard, “the independent consultant (Tony DiCioccio) worked with Live Nation on a unique distribution strategy that used the secondary market as a sales distribution channel for select high-end tickets.” Hopefully now that the ‘scam’ has been exposed, the involved parties will be criminally charged and the practice will end, although only time will tell and we’ll have to wait and see what the final outcome is.

Employees of Live Nation and the band Metallica were caught with their hands in the ticket jar.