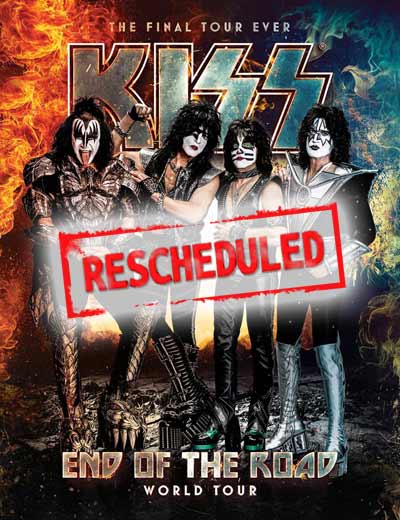 We are excited to announce rescheduled and new European dates for 2021. Further dates will also be added to the cities announced today.

Paul Stanley says, “We are waiting. We are ready. When we are told everyone is safe and this pandemic is over, we will shake the earth and rock your world as always and as never before.”

Gene Simmons says, “We can’t wait for this pandemic to be over, and for all of you to be safe. We are planning to rock your world, once it is safe out there, for all of you and for us. See you in Europe”


KISS END OF THE ROAD 2021 rescheduled and new European dates announced today are below. With more dates to be added.

KISS will be offering VIP experiences and special KISS Army fan presales. VIP experiences may include a personal photo opportunity with the band, access to an exclusive pre-show lounge and a behind the scenes tour. Visit www.kissonline.com/tour for more information.

Unfortunately, due to scheduling issues involved with moving the tour back a year KISS will not be able to play the following cities, that were originally set for 2020.

Those fans with tickets for the above cities should refer to their ticket office for refunds.