Korn still as hardcore as ever, as newly released music video for new song ‘Cold’ is released. 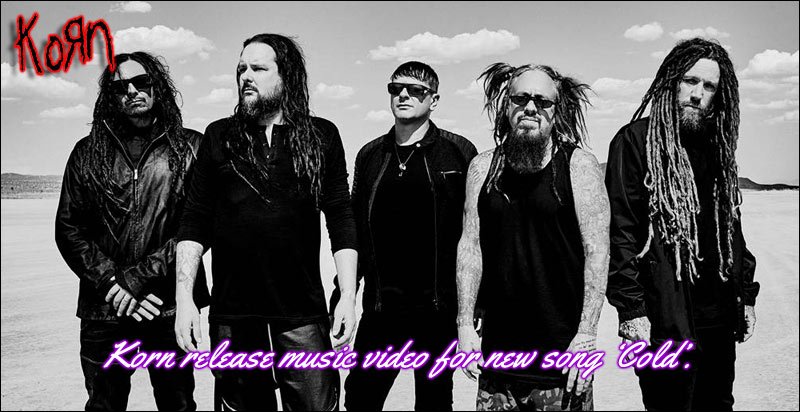 Metal band Korn has just released another new song, this one titled “Cold,” in advance of their new album being released on September 13th. The album is titled ‘The Nothing‘ and the band’s fans are extremely psyched for it to be released. You can listen and watch the new music video ‘Cold’ below. The band defines the song as an ‘experimental offering’ but as soon as you listen to it, there is no doubt that it follows the usual Korn sound we are all used to. Heavy rhythms guided by bass and drums is being labeled as sonic paranoia and you can ever hear the vocals of lead singer Jonathan Davis being stretched to their limits as he hits highs along with low gutteral growls. When asked about the new album, Jonathan Davis replied “Deep, within our Earth lives an extraordinary force. Very few are aware of the magnitude and significance of this place where good/evil, dark/light, bliss/torment, loss/gain and hope/despair all exist as one- pulling at us every moment of our lives.” … “It’s not something we can choose to navigate, but rather an awareness of this ‘presence’ that surrounds us with every breath, as if we are being watched at every moment,” Jon went on to say. “It’s the place where black and white energies attach themselves to our souls, and shape our emotion, choices, perspective and ultimately our very existence. There is a miraculous and small realm within this vortex and it’s the only place where balance between these dynamic and polarizing forces exists; Where the soul finds its refuge. Welcome to THE NOTHING.”. Check out the music video for COLD below, and don’t forget to check out our own Korn event page which lays out the present tour that Korn is on with Alice in Chains.

Korn releases new music video for their song COLD, which is one of the songs on their new, upcoming album The Nothing.