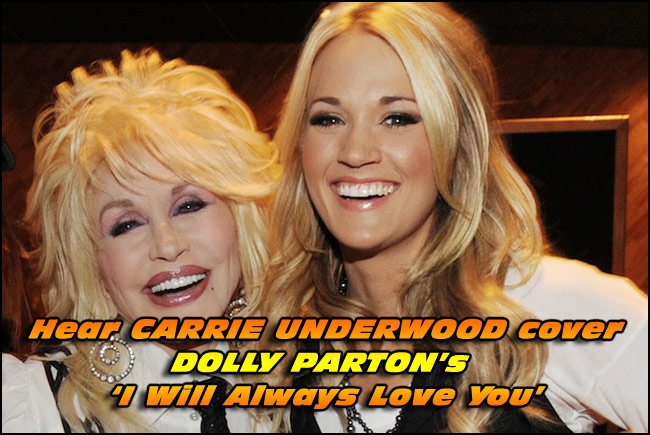 Country music diva Dolly Parton‘s classic song ‘I Will Always Love You‘ has been getting fresh, new interest lately as one of three songs that are part of “Forever Country,” the country mash-up event recently released by the Country Music Association in honor of the 50th anniversary of the CMA Awards. The recording has already rocketed to the Number One spot of Billboard’s Hot Country Songs chart. Country legend Carrie Underwood, who participated in “Forever Country,” is known for singing Dolly Parton’s emotional standard during her tour stops. Underwood also performed the song on the Bobby Bones Show in March as part of Joy Week, but her incredible, stirring version has only popped up on the internet this week.

Check out the video below to hear Carrie Underwood cover Dolly Parton’s ‘I Will Always Love You’.

Carrie Underwood’s stripped down rendition (she’s joined only by an acoustic guitar) is chill-inducing as she delivers a pitch-perfect interpretation of the bittersweet love song. Clad in a pink t-shirt, her eyes often closed as she performs, Underwood hits the high notes with the ease she’s exhibited since her days on American Idol, but it’s the sheer, gale-force power that she brings to the song that stands out. Carrie Underwood has also performed the song on her current Storyteller tour, as well as with Keith Urban and Vince Gill during an All for the Hall benefit for the Country Music Hall of Fame in 2014, but this spare interpretation stands out as one of her loveliest. Enjoy the video below.

Carrie Underwood Performs “I Will Always Love You”