Aerosmith take to the stage with Jimmy Page back in 1990. Watch It Here. 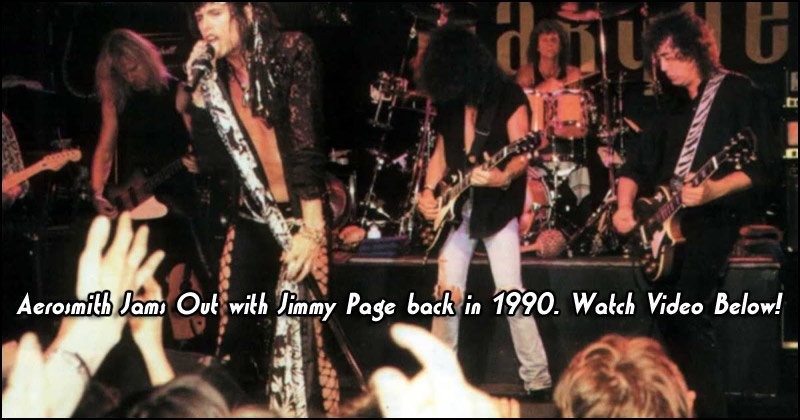 It was back in September of 1989 when Aerosmith released their popular studio album PUMP. It was the band’s 10th album in the studio, and their 3rd since reuniting earlier a handful of years back. Their album PUMP was a huge success, containing hits such as Janie’s Got A Gun and Love In An Elevator. In support of that album, the band toured and also performed at that year’s Monsters of Rock music festival, which took place on August 18th 1990 at Castle Donington over in the United Kingdom. It was during that performance that Aerosmith introduced their special guest ‘Jimmy Page‘, who then proceeded to hop up on stage and crank out a couple of songs.

Then, two nights later, Jimmy Page again joined Aerosmith, this time at an intimate club show over at the Marquee in London. Together, Jimmy Page and Aerosmith tore through an exciting small concert consisting of Jimmy Reed’s “I Ain’t Got You,” the Yardbirds’ “Think About It,” Jimi Hendrix’s “Red House” and Led Zeppelin’s “Immigrant Song,” before finishing up with an awesome version of “Train Kept A-Rollin’.” You can watch and listen to five songs in the video below.

If you weren’t aware, Aerosmith will be performing a Las Vegas residency, aka Aerosmith: Deuces Are Wild, which will run for 18 shows in April through July 2019 at Park Theater at the new Park MGM resort. Giles Martin, who is best known for creating the soundscape for The Beatles Love by Cirque du Soleil show in Las Vegas, will produce the set of concerts.

Aerosmith Jams out with Jimmy Page at the Marquee Club back in 1990. Watch the video below!