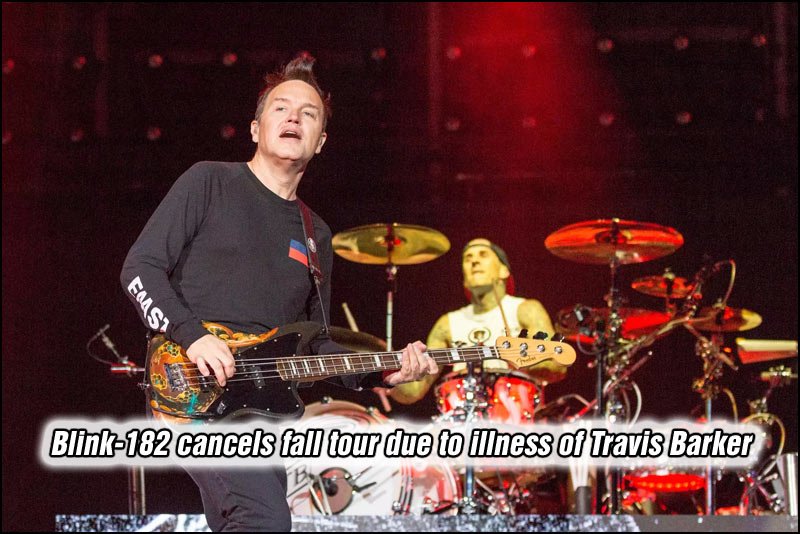 Fans are upset but totally understand that the band Blink-182 have canceled a small concert tour that was originally set for this fall, including their headlining appearance at Riot Fest in Chicago, which takes place soon on September 14th to 16th. The band announced in a statement made on Twitter that drummer Travis Barker’s medical conditions were “still too risky” for his medical staff to allow him to play drums. In June, Blink-182 postponed several of their Las Vegas residency dates, “due to the blood clots in both of Travis Barker’s arms.”

“The past few months have just sucked as I have been sidelined just waiting for my doctors to clear me so I could get back on the road and perform with my band,” Barker said in a written statement. “Unfortunately, the risks associated with drumming are still too great. I am doing everything I need to do so I can get back on the road as soon as possible. I want to thank my fans, family, friends and bandmates for all the love and support.”

The band did say that they would be coming back in 2019 to headline Riot Fest. As of right now, Weezer, Run the Jewels and Taking Back Sunday have been scheduled for this year’s Riot Fest in place of Blink-182’s scheduled appearance. The festival announced it would be unveiling additional performances within the next day or so.

Sadly for fans, Blink-182 has just canceled their mini-tour for this fall due to the health issues with Travis Barker.