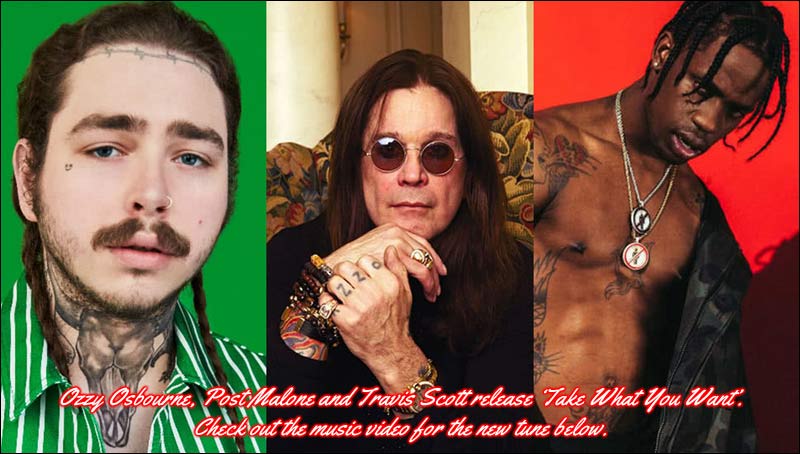 Yes, you heard correctly. A collaboration that no one could have predicted has just released a new song called ‘Take What You Want‘. The unexpected trio of Post Malone, Ozzy Osbourne and Travis Scott just floored music fans with a great new tune. This happens to be the first song that Ozzy has released since his health scare several months back. Hopefully this proves that Ozzy himself is on the mend, and is back to his usual self. I must admit that Ozzy sounds great on the track, and even the guitar solo is very Ozzy-ish. It was just last year when Ozzy had no other choice but to cancel his concert tour due to having a very serious staph infection. Then to top that off, he fell at his home and hurt himself even further. Ozzy was asked about his health condition and he said “It’s scary stuff … From 40 [years old] to 70 was okay and suddenly you get to 70 and everything caved in on me. I’m taking physical and occupational therapy classes, but the progress is very slow. They say it’s going to take at least a year. I’m hoping that I’ll be okay and ready to go by January [when the tour resumes]. I’m really keeping my fingers crossed.”

Check down below for the music video of Take What You Want, and listen to the latest from Ozzy, Post Malone and Travis Scott. You should be pleasantly surprised.

Ozzy Osbourne, Post Malone and Travis Scott release Take What You Want. Check out the music video for the new tune below.