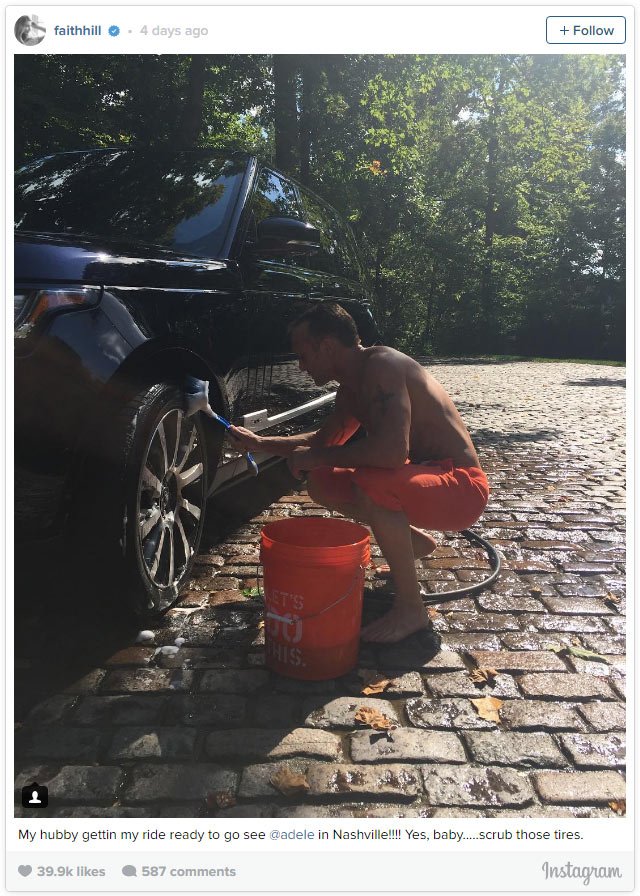 When you’re a mega country star like Tim McGraw, no body really expects you to wash your own car, but the “Humble and Kind” country singer does it anyway. Well, for his wife Faith Hill that is. Faith Hill posted a picture on the popular social media site Instagram on October 17th, bragging about her husband as he was shirtless and down on one knee scrubbing the tires of her ‘ride’ before she went to the Adele concert in Nashville. Not only were female fans fascinated with the picture for obvious reasons, but fans of the country couple were surprised that Tim McGraw would do such a simple task himself. Of course, it seems McGraw would do just about anything for wifey Faith Hill, including breaking out the sponges, soap and a garden hose.

The country duo just celebrated their 20th anniversary October 6th and have opened up about the everyday challenges of marriage and parenting most people go through. For example, they just had to deal with sending their oldest girls to college.  “We were scared to even engage in conversation because we knew we would sort of, just fall apart,” McGraw says. “It was painful (to say goodbye), but, in a way it made us sad, but made us happy as well.” … (continued below) …

Though they have learned some lessons along the way (McGraw says the secret to marriage is to “Listen!”), it’s clear the two are definitely still in love two decades later. McGraw recently posted a photo of a mirror featuring a handwritten love note from Hill, scrawled in lipstick, recreating his marriage proposal. He popped the question at Country Jam in Colorado 1996, just before he stepped onstage to perform. Hill, still stunned by the proposal, didn’t have time to give him an answer, so McGraw had to play the whole set in limbo. Fortunately when he got back to his dressing room, his wife-to-be had written her answer in sharpie on a mirror, sealing it with a lipstick kiss: “Yes! I’m gonna be your wife.”


The country duo of Tim McGraw and Faith Hill have also recently announced their 2017 world tour named Soul2Soul and it is scheduled to span from April of 2017 all the way through October. As of this moment, they have over 60 cities on their tour list.