While it’s no doubt that Richie Sambora was a HUGE part of the band Bon Jovi for quite a long time, many of their songs were creations of either Jon’s or his, or a combination of both. The break up seemed mutual (although it was a surprise) and still is on going. Although it is not slowing down Bon Jovi what so ever. The popular rock and pop band has a new album full of new songs, and a 2017 tour on its way. The first released hit from the new album is This House Is Not For Sale and its popularity took right off, as with most of anything that Bon Jovi does. You can find the video for the song below.

Recently, the band appeared on Good Morning America and was hanging out with co-host Michael Strahan. “Writing a song, to me, is the closest thing that I’ll ever know to immortality because it’s something that’s going to last forever,” front man Jon Bon Jovi said during an interview with “Good Morning America” co-anchor Michael Strahan. The band is coming out with a new album, “This House is Not for Sale,” which took just about three years to write, and is the first without original lead guitarist Richie Sambora, who left the group without any real notice back in 2013.

In 2017, the band Bon Jovi has already began releasing tour dates and there does not seem to be any plans to have Richie in that scene, but I guess fans will just have to wait and see (and pray!). It would be really nice if whatever the issue is, it could be worked out and the band can go back to ‘normal’. I guess only time will tell. … (continued below) ..

Jon continued on and said “Everyone says, ‘Well, what happened?’ We were in Calgary. The last album was entering the charts at No. 1. We’re sold out every single night. It’s show No. 21, and the short of it is, Richie just didn’t show up at the show,” Jon Bon Jovi said. “And we haven’t seen him in person since. There was no fight. There was no money. There was nothing I swear in my whole career, and he’ll tell you the same thing. So we went on.”

The band’s latest studio album title, “This House is Not for Sale,” is meant to evoke “integrity,” Jon Bon Jovi explained. To date, the band Bon Jovi has been around for 33 years and have sold over 130 million albums. I’d so NO, neither Jon himself or the band Bon Jovi is slowing down.

The band Bon Jovi on the set of Good Morning America with co-host Michael Strahan. 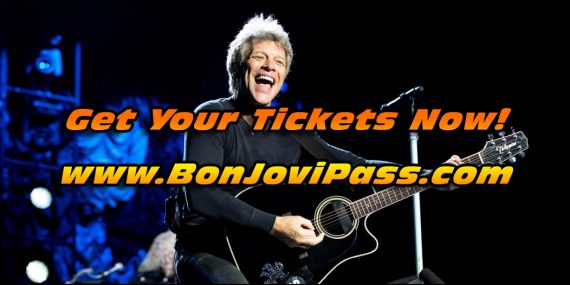 Bon Jovi’s 2017 Concert Tour has already been announced and its going to be huge!