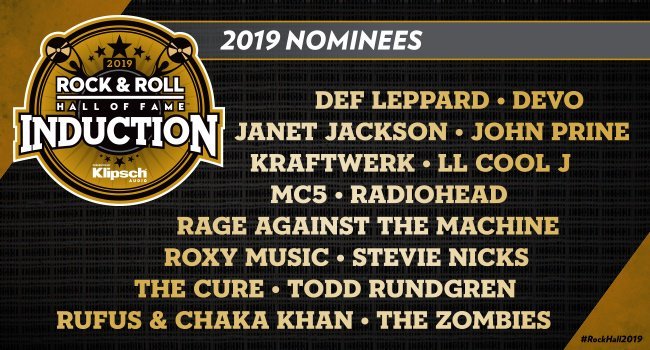 Every year I hope that certain bands make it into the Rock & Roll Hall of Fame, and they never cease to let me down with their list of nominees. This year, there’s some pretty good names being listed, even though a portion of them are NOT considered a Rock & Roll entity. In 2019, the fifteen performers / bands that are on the list of nominees include the following : Def Leppard, Devo, Janet Jackson, John Prine, Kraftwerk, LL Cool J, MC5, Radiohead, Rage Against The Machine, Roxy Music, Stevie Nicks, The Cure, Todd Rundgren, Rufus & Chaka Khan, and The Zombies. Yes, I know, many of these are as far from Rock & Roll as you can be, but as we have seen before, that doesn’t seem matter much for some reason. We’re not saying that everyone on this list is not talented or extremely popular, it’s just sort of hard to see LL Cool J (who I personally like), Janet Jackson or Chaka Khan being listed in the same place as Def Leppard, Stevie Nicks or even Rage Against The Machine. Our personal top two on this list are Stevie Nicks (of Fleetwood Mac) and Def Leppard, but that doesn’t mean that they will make it. As we have seen before in the past, anything can happen.

We will have to wait until March 29th, 2019 for the event to happen. The 2019 Rock & Roll Hall of Fame Ceremony will be taking place at Barclay’s Center in Brooklyn NY, and is being sponsored by Klipsch Audio. We just had someone ask us how do bands/performers become eligible for the Rock & Roll Hall of Fame, and the answer to that is it must be at least 25 years after the release of your first record. Certain criteria is looked at, including influence and significance of the artists’ contributions to the development and perpetuation of rock and roll. Yes, ‘Rock and Roll’ and now you see why some people question some of the performers who have been nominated in the past, and even now. Either way, the ceremony is usually a blast to watch, and the music performed is just as great. Who will ‘win’ this year? Who knows. You’ll have to tune in and watch the ceremony itself.

Here is the list of the 15 nominees who are up for induction into the Rock and Roll Hall of Fame for 2019. Who do you think will make it in?