Justin Johnson and his Shovel Guitar 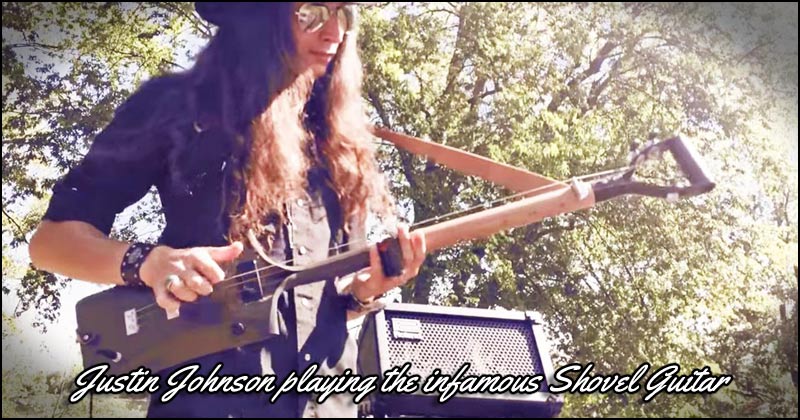 It must have been at least a year ago when I first heard his name. A Justin Johnson video came across my feed, and at that point, I had no idea who he was. He was with a three string guitar made from an every day shovel. Yes, a shovel. I thought to myself, “what in the word is this?”. I took one listen (I watched the video) and was totally blown away. Not only was this dude able to play the ‘shovel guitar‘, but he was amazingly talented on it. With only three strings on the guitar, this guy was able to play a solid constant rhythm, plus go off on an amazing ripping solo. It was if I was listening to one of the greats like Jimi Hendrix or Stevie Ray Vaughn. I thought ‘Who the heck is this guy?’ and I did a little research. According to Wiki, “Justin Johnson guitar style blurs the lines between traditional and the cutting edge, bringing the guitar into the future by taking it back to it’s roots.” and IMDB says “International touring Nashville recording artist Justin Johnson has been hailed by Guitar World as a “must-see act”, dubbed “The Wizard” for his mastery of stringed instruments, and recognized as Slidestock International Slide Guitar Champion.”

The first album from Justin Johnson came out in 2014 and was named ‘Smoke & Mirrors’. I can see why they called it that due to the fact that it what he does with a simple ‘guitar’ almost seems impossible. He actually refers to his ‘guitars’ as ‘handmade roots instruments’ and on that first album he supposedly used 18 different ones that were built by people from all over the world. 8 of those guitars where made out of simple cigar boxes. To date, he’s release four studio albums; Smoke & Mirrors in 2014, If Walls Could Talk in 2016, Drivin’ It Down in 2017, and Turquoise Trail: Soundtrack For A Western in later 2017. I can guarantee that we will be hearing a lot more from him in the future as his talent and fan base grows.

Scroll down to check out some of his music videos that we have collected from around the web, and crank up your volume. This guy is not to be missed and you have got to hear him play. We hope you enjoy it and pick up at least one of his records.

You would not believe the sound that comes from Justin Johnson and his 3 string Shovel Guitar. This guy is flat out amazing. Look below for some of his music videos.


Crankin’ Up the 3-String Shovel Guitar!