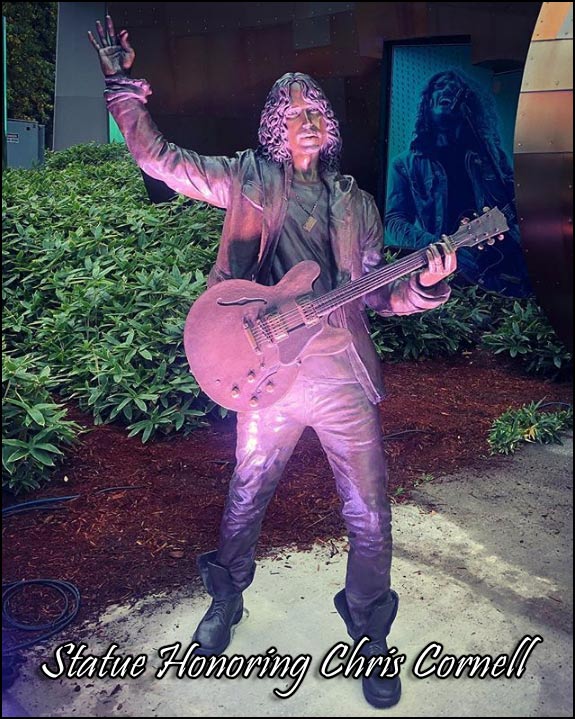 It feels as if it was only yesterday, but in reality, it was over a year ago already. It happened on May 18th, 2017 when singer/songwriter/musician Chris Cornell took his own life. He was definitely one of the most talented front-men of his time, and his talents went way beyond just singing. He was an amazing song-writer and lyric writer. Between Soundgarden, Audioslave, Temple of The Dogs, and his solo work, there are way too many hugely popular songs to mention. Fans across the globe were devastated by what happened and will probably never forget. People all over the world held vigils for Chris Cornell, whether it was in the privacy of their own dwelling, or in a public place. Candles were lit in his honor, poems were wrote, songs were sang and people really poured their hearts out. Fast forward to now, almost a year and a half later, and there was just a statue erected in his honor in Seattle. Seattle happens to be what many people call the play were Grunge music was born. He was memorialized by artist Nick Marra in a life-sized bronze sculpture. The statue, which is now on view at Seattle’s Museum of Pop Culture (formerly known as the Experience Music Project), depicts Cornell holding an electric guitar and reaching up to the sky (see Pic and Video below). The artwork was commissioned by Chris’ wife Vicky. Soundgarden’s Kim Thayil, Ben Shepherd, and Matt Cameron also attended the unveiling of the statue. Watch the video below of Cornell’s children unveil the statue.

Here is a picture of the Chris Cornell statue that was just erected in Seattle, in honor of Chris Cornell, who passed away back in May of 2017. Watch the video below of the actual unveiling.

The kids of #ChrisCornell unveil his statue that will now forever stand in his memory in #Seattle. #KOMONews #MoPOP pic.twitter.com/aV1ha2Dc4Y