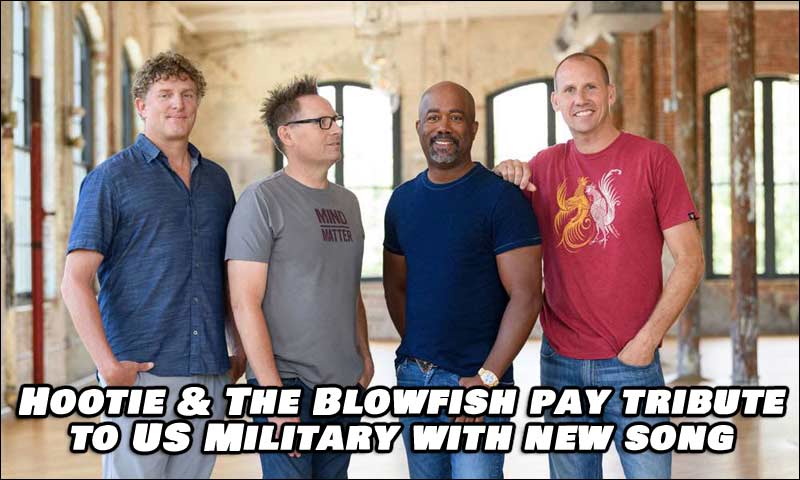 It’s actually been quite a long time since we’ve heard anything from Hootie & The Blowfish, the band itself. Yes Darius Rucker (lead singer) has remained in the spot light, but the band itself has been pretty quiet, until now that is. It’s about that time of the year where we begin to hear music of all sorts of holiday classics, along with new holiday tracks. This 2020 year needs as much help as it can get, and hear comes the band Hootie & The Blowfish to the rescue. The band gives a huge nod and Salute to the US Military in their song “Won’t Be Home for Christmas”. It pays tribute to those who won’t be able to celebrate with their loved ones this year, because they’re on active duty in the military.

The song’s name is “Won’t Be Home for Christmas.” In an Instagram post, the band wrote “We feel very fortunate to have the freedom to enjoy the holidays with our families, however we know that isn’t the case for everyone. Whether they’re deployed overseas or stationed far away from their families, this can be a tough time for military members. We wanted to really pay tribute to that sacrifice and thank these men and women for everything they do to keep us safe.”

The song starts with a young singer named Abigail Hodges, who happens to be the daughter of hit-making producer Dave Hodges. She sings the first verse from the point of view of a young girl whose father is deployed, requesting from Santa that all she wants for Christmas is her daddy to come home.

She sings, “My mommy says he makes; the world a safer place; but I’m scared for him now; ’cause he’s not coming for Christmas.”

Then Hootie & the Blowfish frontman Darius Rucker then picks up the singing from the point of view of a soldier, “We have God on our side but we won’t be home for Christmas; When the fighting subsides; All the angels will sing…; Tell ’em tie a yellow ribbon ’round the ol’ Christmas tree; ‘Cause I’m not coming home for Christmas.”

Last time we heard new music from Hootie & The Blowfish was back in 2019 with Imperfect Circle. That album was their first new studio album in 14 years. It’s quite understandable if fans are psyched.

VIDEO – Hootie & The Blowfish – Won’t Be Home For Christmas